Lily has left a red notebook full of challenges on a favorite bookstore shelf, waiting for just the right guy to come along and accept its dares. But is Dash that right guy? Or are Dash and Lily only destined to trade dares, dreams, and desires in the notebook they pass back and forth at locations across New York?– Excerpt & Image from GoodReads 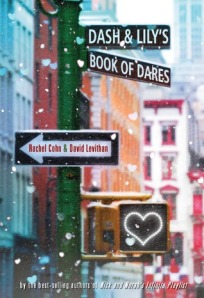 I was a little, tiny bit disappointed about Dash & Lily’s Book of Dares. That’s not to say that I didn’t enjoy it, I did, but it just didn’t live up to the standards of Nick & Norah’s Infinite Playlist. Once again Rachel Cohn & David Levithan collaborated on this with Rachel writing Lily’s chapters and David writing Dash’s. I wonder if they’ve ever thought about doing it the other way round??

Dash’s is 100% Levithan – Cute, geeky and sensitive in a hot way, and pretty metrosexual. I haven’t read any other Rachel Cohn so I can only compare Lily to Norah…I was expecting a similar character- quirky, insecure and feisty- but she was just a bit of a let down. I’m glad she was different, don’t get me wrong, she’s not supposed to be Norah but I think the main reason I didn’t LOVE this book is because me and Lily just wouldn’t get on. She wears her school uniform in the Christmas Holidays (who does that?). She is just SO nice it’s sickening. She doesn’t even approve of swearing. I don’t think we could be friends. And I don’t think she’s a good match for Dash.

Lily does love Christmas though, as do I, so you’d think that would endear me to her. But no.

I love Christmas. I love everything about it: the lights, the cheer the big family gatherings, the cookies, the presents piled high around the tree. The goodwill to all. I know it’s technically goodwill to all men, but in my mind I drop the men because that seems segregationist/elitist/sexist generally bad ist. Goodwill shouldn’t be just for men. It should also apply to women and children, and all animals, even the yucky ones like subway rats. I’d even extend the goodwill not just to living creatures but to the dearly departed, and if we include them we might as well include the undead, those supposedly mythic beings like vampires, and if they’re in, then so are elves, fairies and gnomes.

She is so different to Norah that I couldn’t even picture her as Kat Dennings whom I’m a bit obsessed with so that was disappointing too. She just didn’t fit.

There are definitely flashes of brilliance though. One of the first things I didn’t like about the story is that Lily is basically a fraud. Dash has found the notebook and is traipsing all over New York during the holidays to fulfill these dares, and here he is thinking he’s met this quirky, clever, slightly insane, out-spoken girl (he’s clearly picturing Kat Dennings too) when really the whole thing was her brother’s idea and she’s just sort of going along with it. But then, I guess that’s what it’s like when when you’re just getting to know someone. You find out one thing about them and it defines who they are to you. If you ask me, first impressions are worthless.

I think Dash would agree with me.

I wanted to write it down. I wanted to share it with Lily, even if Lily was really just the idea I’d created of Lily, the concept of Lily. . . I sat back and let my thoughts flow out. Not directed at her this time. Not directed at all. It would be just like water, or blood. It would go wherever it was meant to go.

Overall Dash & Lily is a really enjoyable read, just don’t expect it to be as poignant (I really hate that word but there’s no better in this case) or as beautiful as Nick & Norah.

I give Dash & Lily's Book of Dares 3 unicorns (out of 5 unicorns). It would be 3.5 unicorns but I can't cut a unicorn in half, that would be devastating.

This edition was published by Mira Ink, Oct 2012 and belongs to Dora. Thanks Dora 🙂

7 thoughts on “The Verdict: Dash & Lily’s Book of Dares”