The main thing I have loved about Horror October is the opportunity to branch out a little. I am, and will remain a BOOK blogger, but like most of you reading this I’m sure, I have other interests too. TV and Film are also great source of enjoyment in my life.

Autumn is always such a great season for new TV shows and this year has been no exception. So I wanted to share with you some my favourite new horrorish shows, and those I am really excited about *squeal*!

OMG I can’t even tell you how excited I am about this. I have loved Jonathan Rhys Meyers since I saw him in Gormenghast, and then Velvet Goldmine where he played a character based on David Bowie. He was so perfect in both of those so him being cast as Dracula is just a bit amazing. Also Katie McGrath from Merlin plays Lucy Westenra…BONUS!

Synopsis from IMDB: Series introduces Dracula as he arrives in London, posing as an American entrepreneur who maintains that he wants to bring modern science to Victorian society. In reality, he hopes to wreak revenge on the people who ruined his life centuries earlier. There’s only one circumstance that can potentially thwart his plan: Dracula falls hopelessly in love with a woman who seems to be a reincarnation of his dead wife. Written by NBC

Dracula starts on NBC on Oct 25th in the states and shortly after on Sky Living in the UK.

My excitement for this is on par with Dracula although I didn’t enjoy the last series anywhere near as much as I thought I would! I just felt it fizzled out a bit and I lost interest. This, however, looks crazy good!

AHS: Coven started on Oct 9th US, and will begin on FX in the UK on the 29th…just in time for Halloween!

Synopsis from Sky.com:
The Tunnel is a gripping new thriller from the makers of Broadchurch, set against the backdrop of Europe in crisis.

When a prominent French politician is found dead on the border between the UK and France, detectives Karl Roebuck (Games of Thrones’ Stephen Dillane) and Elise Wassermann (Harry Potter’s Clémence Poésy) are sent to investigate on behalf of their respective countries. The case takes a surreal turn when a shocking discovery is made at the crime scene, forcing the French and British police into an uneasy partnership.

As the serial killer uses ever more elaborate and ingenious methods to highlight the moral bankruptcy of modern society, Karl and Elise are drawn deeper into his increasingly personal agenda.

Inspired by Scandinavian drama The Bridge, it’s an original production for Sky Atlantic HD and the result of an entente cordiale with France’s CANAL+

The Tunnel started on Sky Atlantic on Oct 16th 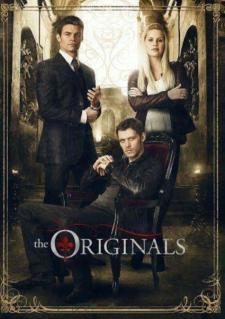 I used to LOVE The Vampire Diaries although I never read the books. The thing is, the last few series of TVD have been rubbish. Sad Face. So, I don’t really know how to feel about this spin-off but I am looking forward to finding out!

Synopsis from IMDB: A spin-off from The Vampire Diaries and set in New Orleans, The Originals centers on the Mikaelson siblings, otherwise known as the world’s original vampires: Klaus (Joseph Morgan), Elijah (Daniel Gillies), and Rebekah (Claire Holt). Now Klaus must take down his protégé, Marcel (Charles Michael Davis), who is now in charge of New Orleans, in order to re-take his city, as he originally built New Orleans. Klaus departed from the city after being chased down by his father Mikael, while it was being constructed and Marcel took charge. As Klaus has returned after many years, his ego has provoked him to become the king of the city. “Every King needs an heir” says Klaus, accepting the unborn child. The child is a first to be born to a hybrid (part vampire, part werewolf) and a werewolf (Hayley). Written by Anaya Miller

This has been a surprise for me. I wasn’t sure it would work, but I’ve loved it so far. Vera Farmiga is amazing as Norma Bates and I can’t wait to see where it goes.

Synopsis from IMBD: A modern re-imagining and prequel to the movie Psycho. This story begins with the earlier years of a teenage Norman Bates and his mother Norma who live in an old house overlooking the adjoining motel which they are renovating. The house and hotel both come with secrets of their own as does the new town which the Bates’ now call home. Written by Alton Tyre

Bates Motel is currently on Universal in the UK, Thursday Nights. Sleepy Hollow is also worth a mention, so far I’ve seen 2 episodes and it’s been good, I hope they crank it up a notch though!