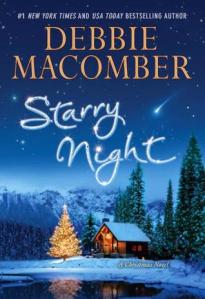 ’Tis the season for romance, second chances, and Christmas cheer with this new novel from Debbie Macomber.

Carrie Slayton, a big-city society-page columnist, longs to write more serious news stories. So her editor hands her a challenge: She can cover any topic she wants, but only if she first scores the paper an interview with Finn Dalton, the notoriously reclusive author.

Living in the remote Alaskan wilderness, Finn has written a mega-bestselling memoir about surviving in the wild. But he stubbornly declines to speak to anyone in the press, and no one even knows exactly where he lives.

Digging deep into Finn’s past, Carrie develops a theory on his whereabouts. It is the holidays, but her career is at stake, so she forsakes her family celebrations and flies out to snowy Alaska. When she finally finds Finn, she discovers a man both more charismatic and more stubborn than she even expected. And soon she is torn between pursuing the story of a lifetime and following her heart.

Filled with all the comforts and joys of Christmastime, Starry Night is a delightful novel of finding happiness in the most surprising places.

Alaska, stargazing and a brooding man, what more could you want this Christmas?

Starry Night has everything I was looking for in a cozy Christmastime read. As soon as I picked it up, I just wanted to snuggle under a blanket with a mug of mulled wine in front of an open fire. I had to make do with a radiator but that’s beside the point.

Carrie is a headstrong, career-driven young woman who is grateful to be working for a respected newspaper but frustrated about her lack of progression. She’s bored of attending glitzy parties and charity events and writing about what people are wearing so when the opportunity comes up to prove to her worth to her boss she jumps at the chance.

But of course there are many obstacles in Carrie’s way. First she has to find reclusive Finn Dalton, and then she has to get him – a stubborn loner with trust issues when it comes to women – to agree to an interview. And then there’s Alaska itself, with snowstorms looming Carrie could easily get stuck in wilderness with a man who really doesn’t appreciate her imposing, and to top it all off, her deadline and Christmas is swiftly approaching.

There were things I really loved about this book. The writing is simple and flawless making it such a quick, easy read. I’ve wanted to go to Alaska my whole life so the setting is what appealed to me initially and it didn’t disappoint on that front.

With all of those things working for it, the romance had such great potential but I felt a bit let down by it in the end. I think Finn’s broody, damaged exterior melted away just a bit too quickly, as if he just changed overnight. I found it a bit hard to believe, but it didn’t stop my overall enjoyment.

I enjoyed the relationship between Carrie and her family, and also Finn’s dog, and I was happy that it was written from both Finn and Carrie’s point of view. It also reminded me a bit of How to Lose a Guy in 10 days and I love that film.

This is the first book I’ve read by Debbie Macomber, and it certainly won’t be the last. Locate an armchair, put it in front of a fire, and give Starry Night a whirl.

Disclosure?: Nope, I bought it.
Title: Starry Night
Author: Debbie Macomber
Details: Paperback, 272 pages
Publication Date: October 8th 2013 by Arrow
My Rating: 4/5
Is it a Keeper? I think so…