I’m absolutely delighted to hand over my blog today to B.I Woolet, authors of The Hunter, The Bear and the Seventh Sister (HBSS). I fell in love with the world they built instantly and I was intrigued to find out where their inspiration came from.

But first, here’s the low-down on HBSS:

When a beautiful and powerful stranger throws Jackson into the world of Arcas, his predictable midwestern life instantly vanishes into an all-consuming adventure.

The last kingdoms of Arcas possess enduring youth, beauty, and wealth but have slowly crumbled under the weight of endless apathy and a painful past.

The rising evil of Gurges Ater now threatens to reopen the ancient kingdom pillars created long ago as passageways between Earth and Arcas. With access to both worlds, Gurges Ater will quickly conquer the weak kingdoms and establish his own throne.

Can Jackson along with a paranoid bear, a lone hunter, and the surviving seventh sister work together to protect both Earth and Arcas?

Or will the unlikely heroes allow their own fears, pain, and past to paralyze them as Gurges Ater opens the pillars and claims the throne?

Leave your own world behind, dive through the shimmering portal, and join Jackson to discover the beauty, danger, and adventure awaiting you in the World of Arcas!
Read my review here.

Thanks Lipsyy for letting us take over your blog today! 🙂

have always been an enjoyable part of our life. Like many others, we grew up escaping to the worlds of C.S. Lewis and J.R.R Tolkien. We loved to “journey” to other worlds but never thought that we would actually create one. Many readers have asked us about our inspiration behind The Hunter, the Bear, and the Seventh Sister, so today we hope to give you some of the inside scoop on our journey through the fantastical world of Arcas.

The idea of writing a fantasy story did not start on the side of a glorious mountain or before a marvelous sunset descending upon the crashing ocean. The World of Arcas was born during… a baby shower. I (Benji, the “B” in B. I. Woolet) was by sitting by the fire on one cold November evening in 2011. Actually, I was hiding a bit from the whole awkward feelings about being a man at a baby shower that wasn’t for my wife or for my baby. So, I sat alone in the back room, enjoying the warmth of the fire and looking out at the snow covered ground. Perhaps I secretly wished to be transported away, so I wouldn’t feel so out of place. “What would happen if I transported to another world?” I thought, staring at the flaming logs and breathing in their smoky incense. Thus, the dawn of a new world, the breath of new characters, and the rumors of a new adventure in the World of Arcas were all conceived during a baby shower.

The backbone of The World of Arcas Series is the union of astronomical science and fantasy. When we first started writing HBSS, the links to objects in the celestial universe weren’t totally formed yet. As fate would have it though, about the same time as the genesis of HBSS, my wife and I got interested in astronomy. As beginning stargazers, we started by learning the constellations and how to star hop. Once we recognized individual stars and the various characters in the night sky, we could use our telescope to find cool deep space objects. 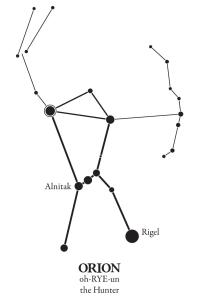 During the day, we were creating a fantasy world. At night, we were gazing at the stars. As we searched the dark sky one night, the powerful figure of Orion—the hunter—almost demanded to enter the story. We knew there were already stories about Orion from various cultures throughout human history, but those stories seemed so removed from our world, so distant. It was time for the stars to come to life for a new generation. After all, the constellations do not just belong to the ancient world; they belong to those of us who are breathing, and seeing, and enjoying them right now. They needed a new story for a new age.

Now, of course, we didn’t get rid of the old legends all together. We did what most people do while forming a creative work: borrowed, altered, and added. Otava (which comes from the Finnish name for the constellation) is the great bear Ursa Major. However, in American culture, many people don’t even know it’s a bear; we usually think of it merely as the big dipper (which makes up the back half of the bear). Hence, we made our bear into a culinary enthusiast! And we also added a few jokes about Otava’s “big dipper.” But there are also many new and interesting aspects of the bear that we added to make him a loveable, powerful, and quirky character!

Ok—beware! I’m about to get super geeky on you now!

Another example of mashing together science with fantasy is found in the chapter “The Ring and the Lyre.” My “go-to” constellation is Lyra when I stargaze. I first use a trick my uncle taught me to test my optics out on the “double-double” (a set of two double stars in Lyra that you can “split” with the telescope). Then, I immediately look for the famous Ring Nebula (M57). It’s an amazing nebula, and I wanted something special for it. For the musical fans out there, the idea formed out of something similar to the dream sequence in Oklahoma.

We turned the stringed Lyre into a magical instrument. So when Sulafat (Gamae Lyrae – the second brightest star in Lyra) plays the lyre, a cloudy magical ring appears that is reminiscent of the Ring Nebula: Upon reaching the bank, the cloud formed a ring swarming round and round, displaying blues and greens in the center along with golds and reds on the outside. The colors were vibrant yet muted by the white haze. A beautifully haunting tune quietly radiated through the ringed cloud.

There are so many other amazing star connections to be discovered as you journey with The Hunter, the Bear, and the Seventh Sister! Don’t get me started on the epic Horsehead Nebula in Orion, our inspiration for the warhorse Alnitak. Or the gravitational modeling involved in creating a planet within a trinary star system.

But don’t worry! Even if you are not into astronomy, you can enter the World of Arcas and enjoy the ride in complete bliss without worrying about star names or constellations or nebulas. It’s a fun adventure story for the whole family to enjoy. The backbone of Arcas may be the celestial universe, but the life of Arcas radiates through its memorable characters and on-going action.

HBSS was a two-year writing project and all this science stuff is great, but it doesn’t reveal our greatest inspiration. We were fortunate enough to receive continual encouragement from close friends and family to follow our dream and finish this first book. Every day at the gym, one of my closest friends asked (consistently for two years!) how the book was coming along. Now folks…that is real inspiration. Friendship.

B. I. Woolet (Benji & Ila Woolet) is the author of The Hunter, the Bear, and the Seventh Sister, the first book from the World of Arcas series. Benji studied Music Composition leading to a Bachelor’s in Music, and Ila studied English leading to a BS in Education. When they aren’t working, writing, or chasing their three little girls around, they are active in their local community and church. The couple enjoys creating lyrical and literary arts, playing music together, and exploring nature. They are happily married and live in Indiana.

Orion: images adapted with the courtesy and written permission of IAU and Sky and Telescope Magazine.

7 thoughts on “Blog Take-Over: B.I Woolet on the inspiration behind their World of Arcas series.”