I’ll respond to any comments/emails on my return 🙂

Have an awesome week!

January was a good month reading wise, but I totally failed on starting most of my challenges. However, February is the month!

A few weeks ago asked the blogosphere for help in choosing two books to complete a list of 10 that I plan on rereading this year (you can check out my original post here if you missed it) .

The results are in:

The Gates by John Connolly 20%

Thank you so much to everyone who voted!

So, here is my final list of rereads. I’m not doing them in order or anything but I’ve just started Northern Lights. Whoop!

Currently Reading: I’m reading Northern Lights by Phillip Pullman as part of my rereads challenge. I must say, I’m finding it a bit of a chore this time round. I have no idea why, it was one of my favorite books when I was at school. 😦

Recently Finished: This week I only finished Vampire Academy by Richelle Mead. It was pretty good. And when I say good, I mean hot. You can read my review here.

Up Next: I have so many awesome-looking ARCS to choose from, and also Cinder by Marissa Meyer, but I really want to start Zombies Vs Unicorns which is a collection of stories, so it’ll probably be good to take away with me next week so I can dip in and out of it.

Leave a comment with your link and I’ll come and have a gander!

Top Ten Tuesday is an original feature/weekly meme created by The Broke and the Bookish (click the image to visit them) who pick a different topic each week. This week the topic is Top Ten Books That Will Make You Cry!

This is quite a hard one for me as I don’t really tend to read that many emotional books, that or I’m just a cold-hearted bitch. It has been said. However, the following books did manage to break me. SOB.

I’m not going to elaborate because I don’t want to give stuff away. But if you’ve read them, you’ll probably know when and why they made me cry and if not it’ll be fun to guess.

Oh, and Mystery Man is a bit of a cheat; it makes me cry from trying suppress laughter!

Feel free to link me to your posts! 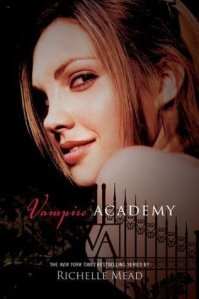 St. Vladimir’s Academy isn’t just any boarding school—it’s a hidden place where vampires are educated in the ways of magic and half-human teens train to protect them. Rose Hathaway is a Dhampir, a bodyguard for her best friend Lissa, a Moroi Vampire Princess. They’ve been on the run, but now they’re being dragged back to St. Vladimir’s—the very place where they’re most in danger…

Rose and Lissa become enmeshed in forbidden romance, the Academy’s ruthless social scene, and unspeakable nighttime rituals. But they must be careful lest the Strigoi—the world’s fiercest and most dangerous vampires—make Lissa one of them forever.

I’d been meaning to start this series ever since it came out in 2007 (woah, has it really been that long?), so I figured I knew what it was going to be about. I expected another fluffy teen vamp read. Which it kind of was. I expected a cross between Twilight and Gossip Girl. Which it also kinda was. But what I didn’t expect was that it would be heavy on mythology and be a unique take on Vampire Lore. That, was a pleasant surprise.

Let me try to explain, more for myself than anything. There are three different kinds of vampires in Mead’s series. Rose is Dhampir, non-royal but strong and whose mission in life is to train as a guardian to protect the Moroi, the weaker of the vampires who have their own royal family. Dhampir’s and Moroi exist together in relative peace although the Dhampir’s that do not train as guardians are often seen as scum. These two breeds of vamps are living, mortal vampires. The Strogoi however, are not. And they’re the bad guys who prey on the moroi (especially the royalty) hence the need for guardians.

It’s pretty ridiculous but it works. I enjoyed the dynamic between Rose and Lissa, who by the way have a psychic bond, and the sexual tension between them was pretty transparent. Hot though, obviously. I liked the whole getting bitten by a vampire is addictive, but dirty thing. In fact we are pretty much bombarded with both actual rules and social suicide rules that these vamps must abide by in order to stay respected. That rang pretty true in a school setting.

Overall, I was impressed by the complexity of Vampire Academy as I was expecting more of a throw-away story, but it was also that complexity that dragged it down sometimes. I felt like this book was just an introduction to a much bigger story (which it obviously is considering how many books there have been) that throws too many ideas around too soon. But I still really enjoyed it.

I’m obviously going to get hooked.

This is a monthly post where I share some of the books that I’ve found through fellow bloggers that I just HAD to add to my wishlist immediately. I’m hoping I’ll look back on these posts and remember to buy/request the books (wishful thinking!). I totally forgot to do a December post so I’ve just chosen my top three from Dec & Jan.

Click on the links to go to the original posts.

Found on: Chrissi Reads
Why: Crime + Snow White = Winner. Plus the cover, obvs!

Found on: A Case of Books
Why: I love Marcus Sedgwick…and well just look how badass it is!

January has been a good month! It took me a while to get back into the swing of things after a great Christmas and New Year but I am well and truly back up and running. I also turned 30. EEEEK!

Read but not yet reviewed

Friday Feature:
Last year I spent Fridays talking about my favourite books and authors which was great, but I decided to open it up a bit this year so I can talk about anything that takes my fancy.

Most Viewed Posts:
For the second month in a row my post about The One has been my most viewed post. I’m so pleased I’m not the only one ridiculously excited about it. Also, for the first time ever, a WWW Wednesday post has not made it into the top 3. Innnnntresting.

Books Purchased:
I didn’t need to buy any books this month because I have sooooooooooooo many on my TBR list and so many I got for Christmas and my birthday. But…I had to buy these.

And The Immortal Rules by Julia Kagawa. It was only £1. I couldn’t resist.

Swap #1: I only swapped one book this month; Vonnegut’s Breakfast of Champions for The Book of Skulls by Robert Silverberg. I haven’t read any Silverberg before.

If you want to get involved in book swapping in the UK visit Readitswapit.co.uk. My username is Lipsyp1.

ARCs/Giveaways:
I received these Advanced Reader’s Copies via Netgalley.

*BOOK OF THE MONTH*

*COVER OF THE MONTH*