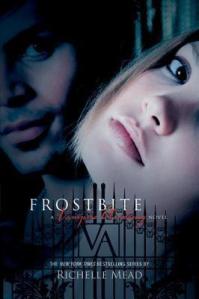 It’s winter break at St. Vladimir’s, but Rose is feeling anything but festive. A massive Strigoi attack has put the school on high alert, and now the Academy’s crawling with Guardians—including Rose’s hard-hitting mother, Janine Hathaway. And if hand-to-hand combat with her mom wasn’t bad enough, Rose’s tutor Dimitri has his eye on someone else, her friend Mason’s got a huge crush on her, and Rose keeps getting stuck in Lissa’s head while she’s making out with her boyfriend, Christian! The Strigoi are closing in, and the Academy’s not taking any risks… This year, St. Vlad’s annual holiday ski trip is mandatory.

But the glittering winter landscape and the posh Idaho resort only create the illusion of safety. When three friends run away in an offensive move against the deadly Strigoi, Rose must join forces with Christian to rescue them. But heroism rarely comes without a price…

Well, getting hooked on this series was probably inevitable. Some hot vampires and a kick-ass female lead, in a high school setting…now, where have I seen that before!? I was really impressed with the first book in this series though, as I wasn’t expecting it to be so rooted in Vampire Lore. (You can check out my review of book 1 here.)

Frostbite, continues where we left off. Rose is getting closer to becoming an official guardian and trying to keep her distance from hot russian Dimitri, whilst Lissa is sickeningly in love with Christian and trying to control her weird Vamp powers.

It’s Christmas (yay) and they are all forced (not that you wouldn’t go willing by the sounds of it) to spend it at an exclusive ski resort to keep hidden from the deadly Strigoi who are still picking off the Moroi royalty one by one. Of course! Where else would one go?

I was pleased that this book has a prologue that went over what we’d learned thus far; the gospel according to Dhampirs, Moroi and Strigoi if you will (I still can’t pronounce them), to remind us of all the intricacies involved in their society and the stigma that comes from certain choices, should they make them. However what I wasn’t OK with was all of the other catch-up sessions in the book. The prologue was perfect, I really didn’t think we needed the rest.

There were a few other things I was disappointed with in this book as well, maybe disappointed is a bit harsh considering I couldn’t put it down, but I felt like all the dark shiz that made me love the first book was gone.

Now they know what Lissa’s deal is, there’s no self-harm (which is obviously a good thing but it made for good reading!), no dead animal corpses in her dorm, and now that Lissa and Rose are permanently back at St Vlads (yes, we’re on nick-name terms already, I move fast) no hot ‘dirty’ feeding sessions. Bore off.

But, I digress. Overall, Frostbite wasn’t boring at all. With the focus taken off Lissa and Rose a little, we get to explore some of the minor (and new!) characters a bit. There’s definitely more of Christian, Lissa’s boyfriend, who I’m really hoping is going to turn out to be evil, right? Because if not what is he good for?-Creating tension between Lissa and Rose I guess, but it was a bit meh.

We also get more of Mason, who grew on me throughout the book, he’s pretty adorable. And then there’s the introduction of tall, dark, mysterious and probably deadly Adrian who seems to be stalking Rose a bit. Well, who wouldn’t!?

AND OF COURSE, there’s Dimitri. Oh delicious Dimitri… Richelle Mead you really are spoiling us!

I liked that they didn’t get together too quickly (because you know, it’s wrong), but I really hope it’s not going to end up being a whole on/off, on/off thing for the next 4 books too.

I NEED TO KNOW WHAT HAPPENS right now. Sigh.

One thing I wasn’t expecting however, was that Rose started to annoy me a bit in this book. I like a protagonist that is confident, but in Frostbite, her self-assuredness (that’s not even a word is it? Bitca!) got a bit too much. She’s constantly pointing out how hot her body is, like anyone actually ever says that to themselves all the time! Pfft, anyway…

No matter what, I couldn’t put Frostbite down. It definitely has some flaws but I’m too far gone to care. I’m invested in Rose, Dimitri and Lissa, and GIVE ME THE NEXT ONE NOW.

3 thoughts on “Not Your Average School Ski Trip…”