I’m delighted to host a tour stop today for Ashley Nixon’s pirate adventure, Cutlass. It made me want to be a pirate, you guys! Keep reading for my review and to enter the awesome giveway.

Synopsis
Notorious pirate Barren Reed has one thing on his mind: Revenge against the man who killed his father. So kidnapping his enemy’s fiancé seems a perfect plan…until he actually does it.

Larkin Lee is more than a pretty face and fiancé to a powerful man. Her fierce personality is enough to make any pirate want to push her overboard.

But when the King of the Orient comes to Barren with a task—to find the Bloodstone, a powerful gem thought only to exist in legend, Barren sees another opportunity to destroy his enemy. Together, Barren, Larkin and a crew of pirates set off to find the stone, only to discover it caused the death of Barren’s own mother and Larkin’s, too. As his strongest allies turn into his greatest enemies, and the life of the girl he kidnapped becomes more important than he ever dreamed, Barren’s quest for revenge becomes a fight to save the Orient.

I don’t think I’ve really read many good pirate books, certainly not since I started blogging, so all I really had to compare Cutlass to before I started reading was classics like Treasure Island and Peter Pan, and it turns out Cutlass, is completely different to both of those, but just as fun!

As all good pirate stories should, Cutlass starts with the kidnapping of a beautiful young woman. The infamous-beyond-his-years pirate Barren Reed and his crew gatecrash his brother William’s engagement party to kidnap Larkin (the fiancé) in an attempt to exact revenge for their father’s death. The only problem is that Larkin doesn’t seem too keen to marry William anyway, and is not quite the damsel in distress that Barren expected her to be.

I was hooked from the start of this book, despite it taking me a while to warm to Barren himself. I felt like he really came into his own as he got to know Larkin better. Larkin was such a strong, feisty character I really felt like she carried a lot of the book, which is no bad thing.

The relationship between Barren and Leaf was adorable too. Other than Larkin, Leaf seemed to be the only person who could put Barren in his place, without fearing for his life. He’s mischievous and funny, and it was easy to believe that they’d been friends forever.

Ashley Nixon did such a great job at world-building. I felt like the history of The Orient was rich and interesting and I just wanted to jump on board and sail along with them.

I did think it took a bit too long to get to the main body of the story – the hunt for the mysterious bloodstone – but even though the pacing was a bit slow at times, it reminded me of a good old-fashioned yarn so I was OK with that! I mean, everything about it screams epic adventure, from a chapter entitled Old Salt, to Barren yelling “If the sea had wanted you, I wouldn’t have been able to save you.”

I also devoured it in two sittings (OK, so I kind of had to because -DEADLINE- and I left it to the last minute but that’s besides the point!), they were two very enjoyable sittings!

I thought the use of elves, magic in a story centered around a pirates was unique and clever, and the myth of the bloodstone was intriguing. And yes I admit it, I was totally in love with Barren by the end of the book. I look forward to reading more of his and Larkin’s adventures.

“I am a pirate, I always follow my heart. It is the only thing I am loyal to.” 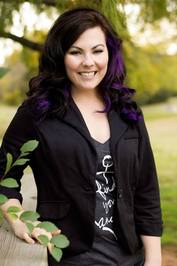 Ashley was born and raised in Oklahoma, where the wind really does sweep down the plains, and horses and carriages aren’t used as much as she’d like.

When she’s not writing, she’s hard at work on her Master’s degree in Library Science and Information Technology, working out, or pretending she’s Sherlock Holmes.

Her obsession with writing began after reading the Lord of the Rings in the eighth grade. Since then, she’s loved everything Fantasy–resulting in an unhealthy obsession with the ‘geek’ tab on Pinterest, where all things awesome go.