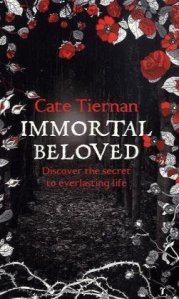 Nastasya has spent the last century living as a spoiled, drugged-out party girl. She feels nothing and cares for no one. But when she witnesses her best friend, a Dark Immortal, torture a human, she realizes something’s got to change. She seeks refuge at a rehab for wayward immortals, where she meets the gorgeous, undeniably sexy Reyn, who seems inexplicably linked to her past.

Nastasya finally begins to deal with life, and even feels safe–until the night she learns that someone wants her dead.

I’ve developed a love/hate relationship with this book. It started off pretty dire to be honest and I was just about to give up on it when I glanced at some of the reviews on Goodreads. Most of them said the same – a terrible start but that it gets much better. So I persevered.

I guess I am glad that I did, because it did get much better, but I’m still not entirely convinced.

Immortal Beloved starts with our protagonist Nastasya and her group of friends whose entire mission in life is to party all night and sleep all day. It’s all a bit cliched. We soon learn that they are immortal, and apparently the only way to spend their time is to get wasted and hook up with each other, or any willing mortals they can find.

I found the whole thing pretty boring and repetitive.

The point at which something worthwhile happens is when Nastasya’s best friend/sort-of boyfriend/immortal life partner, Incy uses ‘magick’ to break a cab driver’s back for no apparent reason. This, thankfully, doesn’t sit well with Nastasya. She develops a conscience overnight, realising what a terrible path she she is on with her terrible immortal friends, and she decides to leave.

She runs away to America to find River, an immortal she met a hundred-or-so- years earlier when she was involved in a car crash. River, a mysterious, hippy-type, had told Nastasya to seek her out at River’s Edge when she’s ready to be a better person.

I couldn’t help but think that this is where the book should had started – instead of the mess that was the first 70 pages – then as a reader we’d wonder what had driven her to this point, and the cab-driver incident could be revealed in a flashback. But it’s not my book, what do I know!?

River’s Edge turns out to be a working farm, which acts as a sort of rehab to immortals who want to be reminded to appreciate every day.

Because of the relative length of our lives, so many things lose importance or become lost themselves […] we forget how to value things, how to feel things. We forget how to love. […] What we start off doing here is to give you a crash course in relearning the significance of moments, of minutes.

I did kind of like that idea, but the constant descriptions of Natasya scrubbing vegetables and washing dishes in order to appreciate every moment was just way too dull. It was like she’d entered into the dullest cult on the planet.

However, there were a few saving graces in this book. Enter Reyn – the viking-esque, grumpy hottie whom Nastaya recognises but can’t place. Between Reyn and good magick classes, Nastasya starts having flashbacks to when she was growing up in Iceland (another saving grace) before she knew she was immortal.

Without giving away the whole plot, let’s just say that Reyn becomes Nastasya’s public enemy #1, but he’s just so damn hot! Can she resist him?

And that, my friends is the ONLY reason I have to continue with the series. Hot, Viking Reyn – a combination of Eric Northman and Hemsworth’s Thor in my mind. More please.

Immortal Beloved is available in paperback from Waterstones. Click here to see how you can get 10% off.

5 thoughts on “Of River & Reyn: Immortal Beloved by Cate Tiernan”