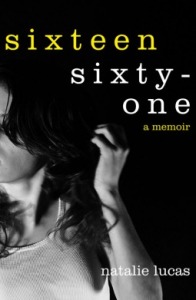 Or so she believed. But when Natalie left her hometown for university and decided she wanted to try to live a normal life, Matthew’s affection soon turned into a consuming obsession.

Written with remarkable candor and grace, Sixteen, Sixty-One is more than an account of suburban grooming: it is the gripping story of a young girl’s sexual awakening and journey into womanhood.

It’s been a while since I finished this book, and I’m still not sure how much I enjoyed it.

I definitely did enjoy parts of it, and I liked Natalie’s voice in terms of the narration, but I found it all a bit odd.

A fifteen year old Natalie meets sixty year old Matthew – a friend of the family, and all of a sudden her eyes have been opened to a whole new world. Matthew draws her in with intellectual discussions regarding literature, art and philosophy, and Natalie is completely taken in. She’s thrilled to have someone in her life to inspire her and talk to her as an adult, as she doesn’t really feel connected with others her age, or her family.

By the time Natalie is sixteen, her and Matthew’s relationship has turned into more, with him making the first move, and her not objecting. Talk has turned from the arts to that of “Uncles”, people who are not bound by society’s rules – clearly all an elaborate grooming technique to make Natalie feel like all of this is special, but not wrong. It left a bad taste in my mouth, as you’d expect.

The book moves at a good pace and covers a lot of ground. Sometimes I couldn’t put it down, and at other times I just wanted it to end.

I really did feel for Natalie. She went through some really horrific times, but there are moments of joy and happiness too.

I think my main problem with it was that it read as fiction. Which is a good thing in terms of readability, but a curse in the sense that I wasn’t convinced by how real it all was. At times I was stunned by Natalie’s decisions, and it’s like she had to keep reminding the reader just how naive and young she still was to justify her actions.

But overall, I have nothing but respect for her in writing this book (if indeed it is all true – could this be another A Million Little Pieces?), as she has told the world about the most intimate details of her young life – even the things she lied to herself about for so many years – and she’s done it in a eloquent, interesting manner.

It certainly makes for a thought-provoking read if nothing else.

Sixteen, Sixty One is available now in paperback from Waterstones.