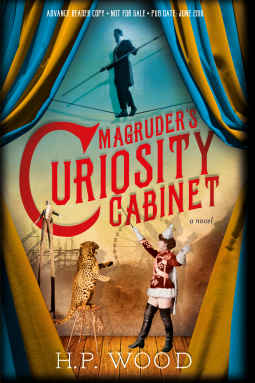 May 1904. Coney Island’s newest amusement park, Dreamland, has just opened. Its many spectacles are expected to attract crowds by the thousands, paying back investors many times over.

Kitty Hayward and her mother arrive by steamer from South Africa. When Kitty’s mother takes ill, the hotel doctor sends Kitty to Manhattan to fetch some special medicine. But when she returns, Kitty’s mother has vanished. The desk clerk tells Kitty she is at the wrong hotel. The doctor says he’s never seen her although, she notices, he is unable to look her in the eye.

Alone in a strange country, Kitty meets the denizens of Magruder’s Curiosity Cabinet. A relic of a darker, dirtier era, Magruder’s is home to a forlorn flea circus, a handful of disgruntled Unusuals, and a mad Uzbek scientist. Magruder’s Unusuals take Kitty under their wing and resolve to find out what happened to her mother.

But as a plague spreads, Coney Island is placed under quarantine. The gang at Magruder’s finds that a missing mother is the least of their problems, as the once-glamorous resort town is abandoned to the freaks, anarchists, and madmen.

Magruder’s Curiosity Cabinet is a nicely written, interesting romp through the early 20th century Coney Island – a place where anything can happen!

Young Brit Kitty Hayward has lost her mother. Sent from their hotel to pick up some medicine when her mum is taken ill, Kitty returns to find that her mother has vanished, and the hotel are pretending they’ve never seen her before. How curious.

Kitty ends up on Coney Island, with no money or belongings, but is fed and taken in by a family of ‘unusuals’ – the members of a freakshow who all live at Magruder’s Curiosity Cabinet.

I loved the setting of this book. I found the descriptions of the fun, freaky, and often fake entertainers who inhabit the resort and how Kitty quickly became a valued addition to their gang really interesting. I thought it was going to be a simple mystery, but as the story develops we realise that it’s more about a plague that is sweeping through the island than it is about a girl trying to find her mother.

I wasn’t expecting it to be such a dark, and often depressing story, and while I initially enjoyed that surprise I felt like the middle of the book could have been more exciting – something was lacking for me.

The star of the show was definitely the characterisation. Each character was unique (as you’d expect from Freakshow performers), and they interacted beautifully with each other. I especially fell in love with Rosalind -who today you would describe as Gender-Fluid, but back then he was seen as an abomination –  and his relationship with lovely Enzo, the ‘half-burned man’.

It’s quite clear that the author had done her research, and I found the portrayal of side-shows, circuses and freak-shows of the time realistic and intriguing. I also enjoyed that the book makes you look at prejudice and discrimination and made me eternally thankful for how much society has changed since the 1900s.

Overall, I feel like Magruder’s Curiosity Cabinet was definitely worth a read, even if it left me a little deflated.