Prepare yourselves, Horror October is back!

Autumn is the best time of year to read all of those books you’ve been too scared to open and to curl up on the sofa to watch your favourite scary movie, so once again I’m dedicating a whole month to doing just that. Horror October #5 is here!

If you’re not a huge fan of horror, do not fret. As ever, I’m using the term quite loosely and hope there will be something to suit everyone.

Last year I hosted the inaugural Flash Fiction Battle which turned out to be a huge success so I will be doing the same again this year with a bunch of new, brilliant writers to battle it out for the accolade of King or Queen of Horror (October).

The success of last year’s event was totally down to you guys getting involved and voting en masse, so I hope you’ll join me in making this year’s competition even bigger and better. Look out for the first FFB post tomorrow!

So, without further ado, here’s what’s coming up for Horror October 2017:

I probably won’t get through all of these within the month but I’m going to give it a bloody good try. Click the links to visit their Goodreads pages.

I am Behind You ~ John Ajvide Lindqvist, Marlaine Delargy (Translator) 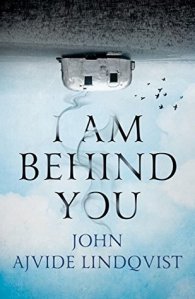 Molly wakes her mother to go to the toilet. The campsite is strangely blank. The toilet block has gone. Everything else has gone too. This is a place with no sun. No god.

Just four families remain. Each has done something to bring them here – each denies they deserve it. Until they see what’s coming over the horizon, moving irrevocably towards them. Their worst mistake. Their darkest fear.

And for just one of them, their homecoming.

This gripping conceptual horror takes you deep into one of the most macabre and unique imaginations writing in the genre. On family, on children, Lindqvist writes in a way that tears the heart and twists the soul. I Am Behind You turns the world upside down and, disturbing, terrifying and shattering by turns, it will suck you in.

Inspired by the work of Shirley Jackson and Susan Hill and set in a crumbling country mansion, The Silent Companions is an unsettling gothic ghost story to send a shiver down the spine…

Newly married, newly widowed Elsie is sent to see out her pregnancy at her late husband’s crumbling country estate, The Bridge.

With her new servants resentful and the local villagers actively hostile, Elsie only has her husband’s awkward cousin for company. Or so she thinks. But inside her new home lies a locked room, and beyond that door lies a two-hundred-year-old diary and a deeply unsettling painted wooden figure – a Silent Companion – that bears a striking resemblance to Elsie herself..

When her mom inherits an old, crumbling mansion, Seda’s almost excited to spend the summer there. The grounds are beautiful and it’s fun to explore the sprawling house with its creepy rooms and secret passages. Except now her mom wants to renovate, rather than sell the estate—which means they’re not going back to the city…or Seda’s friends and school.

As the days grow shorter, Seda is filled with dread. They’re about to be cut off from the outside world, and she’s not sure she can handle the solitude or the darkness it brings out in her.

Then a group of teens get stranded near the mansion during a blizzard. Seda has no choice but to offer them shelter, even though she knows danger lurks in the dilapidated mansion—and in herself. And as the snow continues to fall, what Seda fears most is about to become her reality…

The Passion of Cleopatra (Ramses the Damned #2) ~ Anne Rice

From the iconic and bestselling author of The Mummy and The Vampire Chronicles, a mesmerizing, glamorous new tale of ancient feuds and modern passions.

Ramses the Great, former pharaoh of Egypt, is reawakened by the elixir of life in Edwardian England. Now immortal with his bride-to-be, he is swept up in a fierce and deadly battle of wills and psyches against the once-great Queen Cleopatra.

Ramses has reawakened Cleopatra with the same perilous elixir whose unworldly force brings the dead back to life. But as these ancient rulers defy one another in their quest to understand the powers of the strange elixir, they are haunted by a mysterious presence even older and more powerful than they, a figure drawn forth from the mists of history who possesses spectacular magical potions and tonics eight millennia old. This is a figure who ruled over an ancient kingdom stretching from the once-fertile earth of the Sahara to the far corners of the world, a queen with a supreme knowledge of the deepest origins of the elixir of life.

She may be the only one who can make known to Ramses and Cleopatra the key to their immortality—and the secrets of the miraculous, unknowable, endless expanse of the universe

From the TBR Shelves:

He’s a bestselling novelist who has finally met his biggest fan.

Her name is Annie Wilkes and she is more than a rabid reader – she is Paul’s nurse, tending his shattered body after an automobile accident.

But she is also his captor, keeping him prisoner in her isolated house.

Set in a girls’ boarding school in Massachusetts a haunting and sinister story YA story for World Book Day from prize-winning author Marcus Sedgwick.

1963. Foxgrove School near Stockbridge, Massachusetts. One of the oldest and finest academies in the country – but what really goes on behind closed doors? Nathaniel Drake, the new young English teacher, Isobel Milewski, the quiet girl who loved to draw spirals, her fingers stained with green ink, Jack Lewis, who lent Isobel books – just words, just ink on paper, Margot Leya, the girl with those eyes – who are they, what part have they played in killing the dead?

Under My Skin ~ James Dawson

Meet Molly Sue. Once she’s under your skin there’s no getting rid of her…

Seventeen-year-old Sally Feather is not exactly a rebel. Her super-conservative parents and her treatment at the hands of high school bullies means that Sally’s about as shy and retiring as they come – but all that’s about to change. Accidentally ending up in the seedier side of town one day, Sally finds herself mysteriously lured to an almost-hidden tattoo parlour – and once inside, Sally is quickly seduced by its charming owner, Rosita, and her talk of how having a secret tattoo can be as empowering as it is thrilling. Almost before she knows what she is doing, Sally selects sexy pin-up Molly Sue, and has her tattooed on her back – hoping that Molly Sue will inspire her to be as confident and popular as she is in her dreams.

But things quickly take a nightmareish turn. Almost immediately, Sally begins to hear voices in her head – or rather, one voice in particular: Molly Sue’s. And she has no interest in staying quiet and being a good girl – in fact, she’s mighty delighted to have a body to take charge of again. Sally slowly realises that she is unable to control Molly Sue… and before long she’s going to find out the hard way what it truly means to have somebody ‘under your skin’. 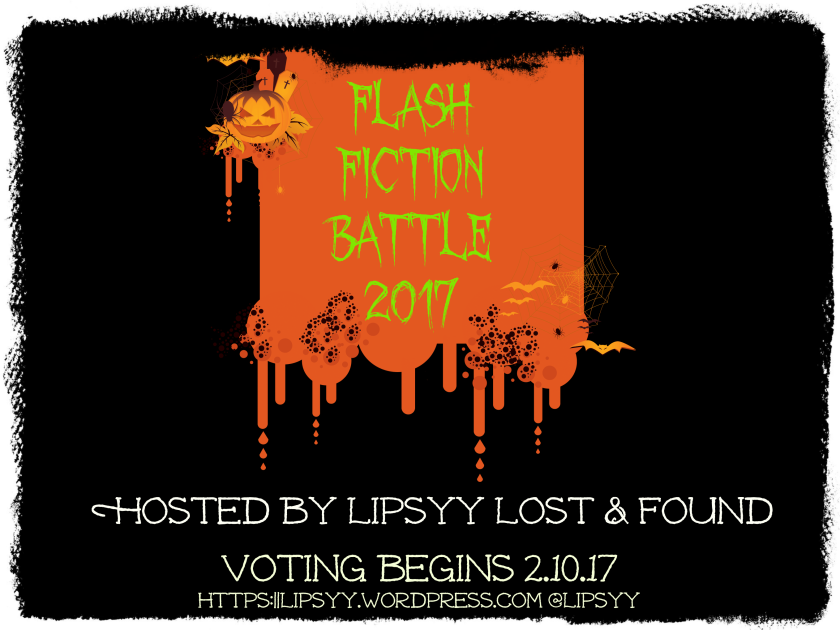 As I mentioned earlier, the main event this year will once again be a flash fiction battle.

Four fabulous authors will fight it out for your votes on the best short story based on a theme chosen by you! More information will follow in my next post when votes will open! 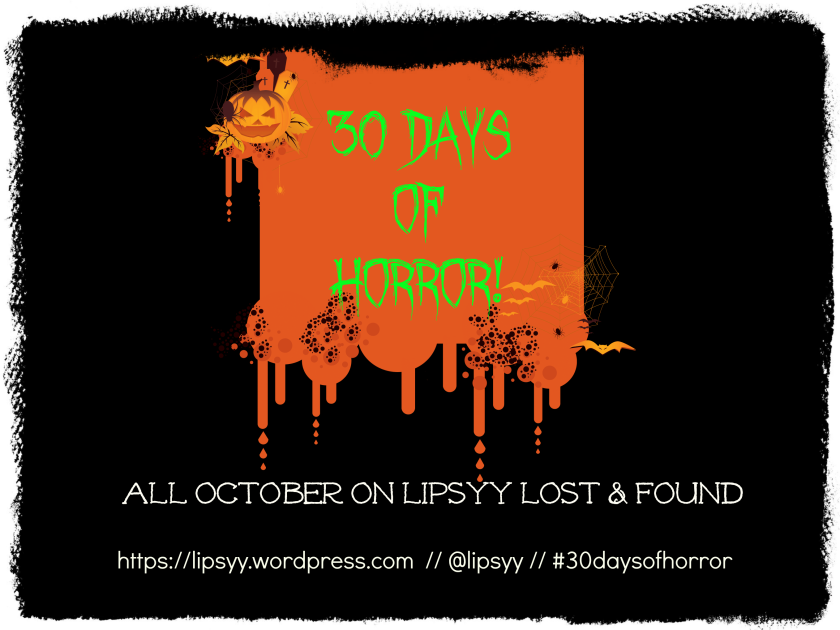 I will attempt to showcase one horror book each day until Halloween. They will be a mix of books I love, and ones I am yet to try. Join me? #30daysofhorror

This Year in Horror so far

Planning a Halloween party? Well here’s everything you need for a successfully scary night in!

I swap the page for the screen and review some of the recently released horror films out there.

A showcase of the horror pulp fiction covers of yesteryear.

How to Get Involved

– Are you planning on reading or posting anything ghoulish or gruesome this month? If so let me know and I’ll link to your posts on my weekly round-up

– Want to be a Horror October guest? I’m still open for guest posts, reviews, and spotlights. You’ll be fully credited and can still post on your own blog too so it’s a good opportunity to reach more people. Email me for more info.

– It goes without saying but I’ll say it anyway…comment away! I’ll also be tweeting using #HO17, #30daysofhorror & #ffb17. And don’t forget to vote!

-Use my Horror October or Flash Fiction image on your sidebar to show your support.