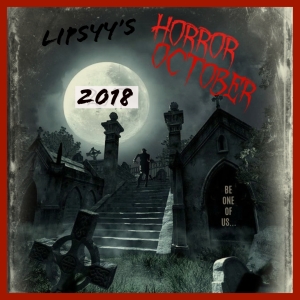 It has become somewhat of a Horror October tradition for me to revisit the best/scariest/weirdest book I read the previous year. This time, like previous years I haven’t chosen the book I actually enjoyed the most, but the book that has stayed with me.

I Am Behind You is a book I’ve thought of often this past year. It was just so strange. Every now and then something will remind me of it and I try to remember what it what about…but as you will read in my review, I have NO IDEA what it was about. But it was creepy. Which is only ever a good thing in my book.

Molly wakes her mother to go to the toilet. The campsite is strangely blank. The toilet block has gone. Everything else has gone too. This is a place with no sun. No god.

Just four families remain. Each has done something to bring them here – each denies they deserve it. Until they see what’s coming over the horizon, moving irrevocably towards them. Their worst mistake. Their darkest fear.

And for just one of them, their homecoming.

This gripping conceptual horror takes you deep into one of the most macabre and unique imaginations writing in the genre. On family, on children, Lindqvist writes in a way that tears the heart and twists the soul. I Am Behind You turns the world upside down and, disturbing, terrifying and shattering by turns, it will suck you in.

I’ve had a hit and miss (but mostly miss), relationship with Lindqvist so far to be honest, but I loved the sound of this book. And I’m pleased to report that this has been my favourite of his so far!

I Am Behind You, is hands down one of the weirdest books I’ve ever read, and thus a perfect read for a dark October evening.

It’s about a myriad of different families who wake up in their holiday caravans to find that the caravan park is gone. They’ve been moved, or have they? There is nothing around, and when they drive, they don’t get anywhere. The ground is strange and smells like blood.

Not only that, but there are these white human-like creatures stalking around. Before long, the families realise that they all see these creatures as different things; a tiger, a salesman, John Wayne characters… what does it all mean?

And then it starts to rain acid.

Out of all of the Lindqvist books I’ve read, I Am Behind You was definitely the most readable. I don’t know whether the translation was just better this time, but the pages flew by. I was totally submerged in this strange, creepy place and had to keep reading to get to the bottom of it.

But here lies the problem. We don’t get to the bottom of it, of anything really. Which was really frustrating. There’s only so many crazy things that can happen without even an iota of an explanation before you stop caring. But read on I did!

Apparently this is the first in a series, so maybe it will be addressed in the next book, but I wish he would have given us something more concrete as to what the hell was going on, you know!?

The star of the show were the characters for me. Each of the families bring something different, and alarming to the story. A few of them are loveable, but mainly they’re all troubled in some way, especially Molly, the token creepy child who was once left in a tunnel and has never been the same since.

I hate to liken every horror writer to Stephen King, but parts of this really did remind me of him and his great characterisation. If you liked Under the Dome, I think you’d enjoy this too.