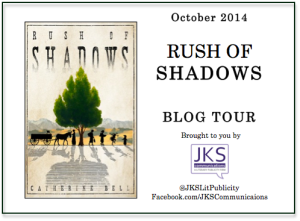 I’m delighted to host a tour stop today for Catherine Bell’s Rush of Shadows, depicting the conflict between settlers and natives in 1800’s Calfornia. It was a rollercoaster of a read!

Synopsis
When American pioneers set their hearts on a California valley where Indians had been living for thousands of years, a period of uneasy appraisal emerged, followed by conflict and soon enough by genocide. The epic greed and violence of the 1850′s and 60′s has been brushed aside by history, conveniently forgotten in the pride of conquest. Willful ignorance and cruelty, terror and desperation were common in that time, but there were moments too of nobility and compassion, ingenuity and forgiveness, qualities which might have prevailed if certain things had been different. Rush of Shadows brings to life two freethinking women, Mellie, a white, and Bahe, an Indian, who enact the clash of their cultures, endure, and come to an unlikely understanding.

I’ve always had a weird fascination with this period of history, despite not actually knowing much about it (shamefully). I remember a book my dad had when I was growing up which was essentially just photos of Native American Indians going about their lives, and I thought it was beautiful and magical.

So when I came across this book and was asked to be part of the blog tour, I was delighted. And, I still am!

Rush of Shadows is about Mellie and Law, a recently married couple who become some of the very first settlers in an area of California, an area inhabited by Indians.

Mellie is sweet-hearted yet extremely strong-willed, with a degree of irreverence about her. You get the feeling from the start that she’s not entirely happy about her lot in life, and has reservations about her husband, Law, but she goes along with his plans regardless.

When they arrive at the place Law has his mind set on, he is concerned with building their home and finding sustainable work, leaving Mellie feeling isolated and alone. This is when she meets Bahé. Bahé, as Mellie names her, is the opposite of Mellie, yet somehow they are similar in many ways too.

To Law’s dismay, Mellie finds herself seeking Bahé out more and more. But as time goes on and more settlers arrive bringing with them their ignorance and fear of the Indians it gets increasingly harder for Mellie and Bahé’s friendship to develop.

This book was such a rollercoaster. On one hand, I loved the way the Indian’s were portrayed, in that the way they lived was such a mystery to the settlers it made them seem so spiritual and almost magical, but on the other hand, the way the settlers saw them and feared them made me so angry.

I liked that Mellie had her own mind and stood up to her husband on occasion (and that he enjoyed it!), but she also let the influence of others impact on her relationship with Bahé and her family.

There is massive scope in this novel. We start at the very beginnings of settlement, when there were only two houses in the region, to the development of a town and a government. I found this really interesting and enjoyed the contrast of this story to that of Bahé’s who learns a lot from Mellie but will never fully understand her or their ways – which I guess works both ways.

Bahé and her family’s lives are in danger from the settlers. Everything that was once theirs – nature, wildlife, freedom, is slowly taken away from them to the point that they begin to starve, and their traditions are basically damned, but she never blames Mellie, or lashes out – such is her spirit.

I found Rush of Shadows dramatic, emotional and infuriating – but all in a good way. Catherine Bell did such a great job of juggling multiple narratives, something which I often dislike in books. I thought it was written really beautifully and the amount of research she did comes across in every single line (you should see the list of sources)! It is definitely one of those books that gives you food for thought, as the themes here are universal and can be applied to any era. 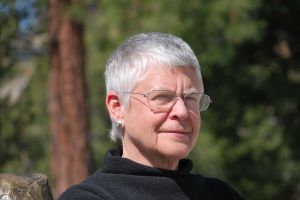 Catherine Bell grew up in a New England family with a sense of its past as distinguished and its culture superior, as chronicled in many of her short stories.

An early reader, she found in fiction that penetrating experience of other people’s lives that opens a wider world. The Winsor School, Harvard, and Stanford prepared her to recognize good writing and thinking. She credits work as a gardener, cook, cashier, waitress, and schoolbus driver with teaching her how to live in that wider world.

She has also worked as a secretary, freelance writer, and therapist, served as a teacher in the Peace Corps, and taught in inner city schools. She has lived in Paris, Brasilia, Nova Scotia, Northern California, and Washington, D.C. Culture clashes, even within families, are often subjects of her fiction. She has published stories in a number of journals, including Midway Journal, Coal City Review, Green Hills Literary Lantern, Sixfold, Solstice, and South Carolina Review. Her story “Among the Missing” won The Northern Virginia Review’s 2014 Prose Award.

She researched and wrote Rush of Shadows, her first novel, over a period of twenty years after she married a fourth-generation Californian and fell in love with his home territory, the Coast Range. The bright sunburned hills, dark firs, clear shallow streams, and twisted oaks were splendid, but the old barns and wooden churches and redwood train station didn’t seem old enough. Where was the long past? Where were the Indians? There was only the shadow of a story passed down by her husband’s grandmother late in life. Born in 1869, she grew up playing with Indian children whose parents worked on the ranch her father managed. One day the Army came to remove the Indians and march them to the reservation, and that was that. She was four years old, and she never forgot.

Bell lives with her husband in Washington, D.C. and visits children and grandchildren in California and Australia. As a teacher at Washington International School, she loves reading great books with teenagers.

Links:
Check out the rest of the tour schedule here: JKS Communications
Add Rush of Shadows on Goodreads
Available from Amazon

Many Thanks to Catherine Bell and JKS Communications!