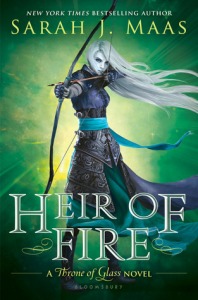 Celaena Sardothien has survived deadly contests and shattering heartbreak—but at an unspeakable cost. Now she must travel to a new land to confront her darkest truth…a truth about her heritage that could change her life—and her future—forever.
Meanwhile, brutal and monstrous forces are gathering on the horizon, intent on enslaving her world. To defeat them, Celaena must find the strength to not only fight her inner demons but to battle the evil that is about to be unleashed.

The king’s assassin takes on an even greater destiny and burns brighter than ever before in this follow-up to the New York Times bestselling Crown of Midnight.

I don’t know what it is about this series. I love it at the time of reading, but then I fall out of love with the idea of it and I struggle to find the motivation to pick up the next book. That’s what happened with Heir of Fire.

I bought a copy not long after its release but it took me this long to pick it up. And even when I finally did, I couldn’t get into it at all! I was pretty close to giving up on the series altogether to be honest…but then I got hooked again. Ugh make up your mind, Woman!

I think I only fell in love with this book about half way through, but then I didn’t want to put it down.

In this, the third instalment of the Throne of Glass series, Celaena Sardothian, the once all-powerful, all-confident assassin is a broken woman. She’s walking the streets in a booze-induced stupor, almost starving, getting into fights and losing most, because her strength has all but gone.

She doesn’t seem to have any direction, and although I found it interesting to see this fall from grace, it was all a bit dull to start with. Until, that is, she meets Rowan.

Rowan, a prince of fae is ordered to train Celaena to control her fae powers so she can once again fight against those who plan on enslaving her and her people. Of course, she’s reluctant at first, tired of fighting for other people, but it’s not long until the fire in her is ignited, and with the help of brutal Rowan, Celaena slowly becomes herself again.

I loved how the relationship between Rowan and Celaena developed and as much as I wanted them to get in on – he is clearly mega hawtttt – I’m glad that instead their friendship became solid and trustworthy. I felt like Celaena really needed that instead of another romance. It was refreshing.

There were a lot of things I didn’t like about this book, for example, I had no idea what the witch-clan chapters were all about, and I found myself skipping some of them but they are pretty terrifying characters and make great villains so I’m hoping it’ll be explored better in the next book.

Despite everything, I still ended up loving this book. I can’t really explain it. I think I’m just destined to have a love/hate relationship with this series.

As it stands, I can’t wait until the next book, but by the time it comes around, I’ll probably feel differently. Sigh!

Heir of Fire is available in paperback from Waterstones now.

It’s there when a girl walks through the forest, the moist green air clinging to her skin. There centuries later in a pleasant greendale, hiding the treacherous waters of Golden Beck that take Anna, who they call a witch. There on the other side of the world as a mad poet watches the waves and knows the horrors the hide, and far into the future as Keir Bowman realises his destiny.

Each takes their next step in life. None will ever go back to the same place. And so, their journeys begin…

You should all know by now that Marcus Sedgwick has become one of my favourite authors in recent years. His books seem to fall into two categories; dark and foreboding, or beautifully poignant, but they all have one thing in common – they are written wonderfully.

The Ghosts of Heaven is no exception, but… sigh, I was quite disappointed. I think my main issue was the format. It was hailed as a book in which the four parts of it can be read in any order and still make sense. I thought the idea was pretty cool and wondered how he’d managed it.

Well, in my opinion, it can be read in any order because this is a book of four completely different stories. I mean sure, I get the spiral thing, and see the tenuous links between each of the stories, but they are essentially four short stories with one common element. It kind of reminded me of some of David Mitchell’s books – all of which I didn’t enjoy.

That being said, I was completely enthralled by the futuristic part involving Keir Bowman who is scheduled to wake up on a spaceship every ten years, and is journeying to a new earth-like planet to inhabit. Only every time he wakes up, more of the crew are dead…

This one was definitely my favourite of the four, it was dark and twisted and reminded me why I love Sedgwick – he can write in every genre – so I’ll try not to dwell on my disappointment of this one. You can’t win them all, right? And anyway, the book is very pretty!

Available to buy in both paperback and hardback, from Waterstones now.

The topic for this week is:The Top Ten Books I Wouldn’t Mind Santa Bringing This Year.

Ooooooooh so many, so, so many. Most of the books I really want are ones that I never got round to buying…I hope Santa has a bottomless sack! 😉

I have a been a very good girl this year, so if you would be so kind, I would like these books in my life…(in no particular order).

More Than This – Patrick Ness: I always need more Ness in my life!

Of Scars and Stardust – Andrea Hannah: This was my second favourite book of the year, which I had as a digital advance copy but I need to own a physical copy. I wanted to read it again as soon as I’d finished it!

Rebel Belle – Rachel Hawkins: It looks so pretty and sounds bad-ass too!

Heir of Fire – Sarah J. Maas: So much love for this series but I just keep forgetting to buy it!

The Bane Chronicles – Cassandra Clare: I never did finish TMI but Alec and Magnus Bane were totally my favourites.

The Jewel – Amy Ewing: I need to fill the void that The Selection trilogy has left and this sounds like it could be up to the job. There’s too long to wait until The Heir is released!

Subversive Horror Cinema (Countercultural Messages of Films from Frankenstein to the Present) – Jon Towlson: I don’t buy a lot of non-fiction books but one or two always end up on my Christmas list. I’m a huge fan of cinematic horror and this sounds really interesting to me.

Aristotle & Dante Discover the Secrets of the Universe – Benjamin Alire Sáenz: I’ve heard so many wonderful things about this book. It’s been on the top of my wishlist for a while now.

The Girl Who Walked on Air – Emma Carroll: I loved Frost Hollow Hall and have been meaning to buy this one, the second book by Emma, since it was released. I have failed.

The Chaos Walking Trilogy – Patrick Ness: It makes me sad that I don’t own these books. I borrowed them off my friend Di but I definitely need my own copies ASAP!

This week the topic is: Top New (ish) Series I Want To Start.

Unfortunately, I couldn’t find enough books to do a Horror October twist on this week’s top ten… I admit defeat. So, here are ten new(ish) series of varying genres, (OK just YA then) that I want to start.

Have you read any of these? Let me know if I neeeeeeeed to bump them up my list!