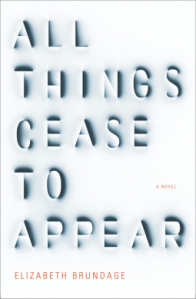 Late one winter afternoon in upstate New York, George Clare comes home to find his wife murdered and their three-year-old daughter alone–for how many hours?–in her room down the hall.

He had recently, begrudgingly, taken a position at the private college nearby teaching art history, and moved his family into this tight-knit, impoverished town. And he is the immediate suspect–the question of his guilt echoing in a story shot through with secrets both personal and professional.

While his parents rescue him from suspicion, a persistent cop is stymied at every turn in proving Clare a heartless murderer. The pall of death is ongoing, and relentless; behind one crime are others, and more than twenty years will pass before a hard kind of justice is finally served.

At once a classic “who-dun-it” that morphs into a “why-and-how-dun-it,” this is also a rich and complex portrait of a psychopath and a marriage, and an astute study of the various taints that can scar very different families, and even an entire community.

What came first…the book, or the book slump? Now there’s a question! I stopped reading this book at around the 35% mark, which I really try not to do for ARCs as I like to fulfil my end of the bargain as much as possible, but I just couldn’t.

I’m not sure why, as it wasn’t badly written, or even overly dull, I just couldn’t muster the motivation to keep going. It may be nothing to do with the book, and everything to do with the fact that I read two really amazing books in a row and was a bit burnt out…who knows!?

All Things Cease to Appear has the makings of a really great mystery/thriller. George comes home to find his wife dead, brutally-murdered-dead, and his little girl alone and scared. George is instantly the prime suspect and his reaction to his wife’s death is quite strange, so he is always a suspect in the reader’s mind too.

I think the main reason I couldn’t get into this book was because I didn’t like any of the characters in it. George is aloof and strange, even his parents are a bit – bland. Yes, bland is how I would describe most of the characters.

I do think that if I was in the mood for this book it could have gone differently. I’m sure it would become clear why the characters were dubious, but I just wasn’t in the mood to get to the endgame.

ATCTA may not have worked for me, but it might for you. I thought the lack of quotation marks for dialogue was interesting, and it actually didn’t bother me at all, I think it was just a mixture of bad timing and ambiguous characters that turned me off.

I DNF at 35% and therefore won’t be giving it a rating.