I started doing ‘lazy Saturday reviews’ as a way of getting reviews done in just 30 mins, and they proved to be quite popular. They are quick and snappy, and concentrate less on the plot and writing and more on my general feelings about said book. They generally end up being a bit of a rant. My fave!

In a perfect world, sixteen-year-old Phoebe Martins’ life would be a book. Preferably a YA novel with magic and a hot paranormal love interest. Unfortunately, her life probably wouldn’t even qualify for a quiet contemporary. But when Phoebe finds out that Dev, the hottest guy in the clarinet section, might actually have a crush on her, she turns to her favorite books for advice. Phoebe overhauls her personality to become as awesome as her favorite heroines and win Dev’s heart. But if her plan fails, can she go back to her happy world of fictional boys after falling for the real thing?

I was totally into it at first. I think any book-lover would find it hard to resist the premise of Bookishly Ever After, but unfortunately my initial love for it was short lived.

I liked that Phoebe is flying the flag for ‘kooky’ introverts. I liked that she’s a geek and OK with that. What I didn’t like was the painfully drawn-out he likes me, he likes me not… OMG he text me and so on and so on.

On one hand I had totally lost interest by about half way through, but for some reason I couldn’t stop. I did feel compelled to find out the outcome of all the will-they-won’t-they whiny teen angst, so I guess it was successful in that way, but I’m sorry to say that I didn’t enjoy the journey, or where the journey led. It was very bland for me.

I would like to say however, that I’m not really the target audience and I do have a love/hate relationship with contemporary YA at best. If I’d read this when I was in school, I probably would have empathised with the characters a lot more. It also didn’t help that the advanced readers copy I received was really distracting with missing words, jumbled up sentences and ADVANCE COPY plastered all over it. I really tried not to let that influence my feelings towards the book, but it made what was, for me, a slow-paced book even more tedious.

This won’t put me off reading other books by Bandeira in future; I enjoyed her fluid writing style, but not the story. 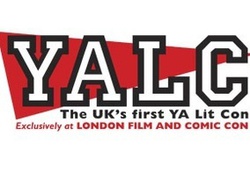 At the weekend my friend Dora and I attended the UK’s first ever Young Adult Literature Convention which took place as part of London’s Film & TV Comic Con at Earl’s Court (more details here). It was amazing and manic and painful all at the same time. But totally worth it.

Here’s my run-down of day one:

I had been a bad friend and hadn’t booked the advanced tickets in time so we had to go and queue to buy tickets on Saturday morning. We got there at about 9am, slightly hungover and very tired from a late-night outdoor Labyrinth screening the night before.

When we saw the queue we wanted to cry. It was so busy, and unorganised, and the closer we got to the door, the more people were trying to push in. The Rage set in. But we amused ourselves by admiring all of the costumes, and there was a nice man and his seven year old Spiderman son in front of us who were lovely.

There were also some guys promoting the new book by Joe Abercrombie, ( which is on my wishlist) by giving people rides on their Viking Wheelbarrow which was amusing.

After just over 2 1/2 hours, a lot of standing, and some sunburn later, we made it inside. And oh holy hell, it was not a good place to be with a hangover. People EVERYWHERE. Hot, sticky and no air. But luckily we had the forefront to ask the guy on box office where the YALC area was so we knew where to aim for – otherwise we may never have found it. It was worse than trying to get to the barrier at a festival.

The good news is that we made it, and there was a bit more breathing space that end. The bad news was that we’d missed the first talk were hoping to attend, The On-going Appeal of Dystopia. Instead we collected tickets for the other talks that were available and checked out all the book swag, and the publisher’s area including the Hot Key Books’ book swap which was a genius idea.

The first talk we attended was one that we actually weren’t too bothered about initially, we just wanted to sit down to be honest but I’m so glad we went, it was great. Sarah McIntyre chaired the event in an awesome cosplay and discussed the process of adapting a novel into a graphic novel.

Marcus Sedgwick was the only one on the panel whose work I was familiar with, and I’d been wanting to get a hold of his graphic novel Dark Satanic Mills for ages, so it was lovely to hear him discuss his experience of writing it, compared to writing a novel.

Emma Vieceli, was full of enthusiasm for her work on illustrating The Vampire Academy graphic novels (which I really, really want now!) and talked about her new web-comic Brakes which she has written as well as illustrated.

It was really interesting to hear the panel talk about how to turn classics such as Pride and Prejudice and War and Peace into a graphic novel.

After the talk I wanted to buy a copy of Emma’s Vampire Academy but they didn’t have it, however both Dora and I bought one of her Manga Shakespeare books (we’re easily converted) and headed over to Emma’s signing table to get them signed. She was so lovely. I couldn’t resist telling her what a good job she’d done with Dimitri – Manga Dimitri is so hot, you guys.

We also headed to Marcus Sedgwick’s signing, and he was the nicest man ever. He chatted away to Dora about Poland (where she’s from) as he’d lived there for a while, and was planning on taking his partner there this summer. I got my favourite book by him signed, and he drew a coffin in it – he knows me so well already!

We didn’t actually have tickets for this talk but we got back just as they were finishing the introductions and there were still some spare seats so we sat down. After that I’m not really sure what happened to be honest. There seemed to be a lot tangents going on, and definitely no talk of dragons. The early start and sunburn perhaps got the better of me.

Thankfully we managed to perk up for the final talk, because two of my favourite British writers were on the panel – Darren Shan and Derek Landy, and it was hilarious as well as interesting!

A lot of the discussion revolved around how much is too much in YA Horror. And the answer? You can get away with anything, apart from decapitating mothers! Both Landy and Shan also discussed the beauty of publishing long series and how you grow as a writer, alongside your characters, from book 1 to book 12.

Don’t worry if you missed YALC, look out for my post of Day 2, and I’ll also be posting a gallery and links to the best news coverage of the event – you’ll feel like you were there by the end of it.