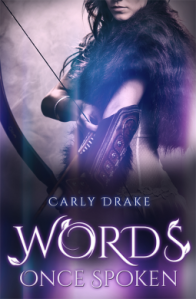 Evelyn might not love the confines of her village life, but she takes her small freedoms where she can get them. But everything changes when her parents decide it’s time for her to wed. Suddenly she loses her tunic and breeches, her bow, her horse, and gains rigid gowns, restrictive manners, and carriage rides.

The best way to escape is through her dreams, but as they become more and more real, Evelyn begins to worry that she is losing her grasp on reality. It is only when she makes two new friends that the truth is revealed: she is destined for far, far more than even she could imagine.

Words Once Spoken was a book of two halves for me. I was so blown away by the cover and loved the synopsis so I was really looking forward to it. And from the off I was delighted.

The story of a girl frustrated by the restrictions and expectations placed on her growing up in medieval England isn’t a new one to me, but I loved the simplicity of the writing which flowed like a fairy tale and what made it for me was the characterisation of Evelyn herself.

She was different in that she needed freedom with a capital N! She hates confined spaces and even being inside with the windows shut is a big no-no for her. Evelyn also can’t stomach regular food and instead nibbles on flowers and other foliage. I found it quite cute, especially her mother’s exasperation of her daughter’s odd habits (including sleeping on a pallet of moss rather than a bed). This was a great way to introduce magic into the story and I could tell from the beginning that Evelyn clearly wasn’t going to turn out to be human. I was banking on a nymph or the like.

Evelyn arrives at court (where she’s forced to go to be married off, of course) leaving behind her horse because she can’t side-saddle, and her mother has burnt all of her ‘boys’ clothes and packed only dresses. Which she rebels against, obviously. Her ‘odd habits’ can be seen as yet another portrayal of female oppression if you want to go down that route, which I don’t. Moving on.

It’s not long before Evelyn has caught the eyes of both Lord Devon and the Prince and a pseudo-not quite- love triangle ensues. Unfortunately this is where Words Once Spoken started to lose me.

This book is ridiculously fast-paced. A little bit too fast-paced, which I don’t think I’ve ever used as a criticism before. The second half of this book was just too simple. At some point it turned into thishappens, thishappens, this,this,this, boom, the end. I felt a bit shell-shocked by the end of it.

Not only do we found out what Evelyn really is, all of a sudden there are vampires and werewolves, good faeries, bad faeries and everything in between all thrown together for i’m not really sure what reason. You can’t just tell me that that guy is a vampire when he has shown NO SIGNS of being anything but human.

Alas, Words Once Spoken is still a nice, uber quick read that is definitely enjoyable; it’s lots of fun. I’m hoping this is just the introduction to Evelyn’s new world that will grow into something great. The ending certainly makes it seem possible.

Disclosure: I received a copy from the Author/Publisher for an HONEST review. Thanks!
Details: ebook, published October 2013 by Escape Publishing
My Rating: 3 out of 5 Unicorns
If you liked this try: Melissa Marr’s Wicked Lovely