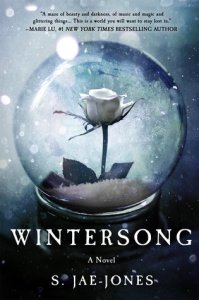 ‘Beware the goblin men and the wares they sell.’

All her life, nineteen-year-old Liesl has heard tales of the beautiful, mysterious Goblin King. He is the Lord of Mischief, the Ruler Underground, and the muse around which her music is composed. Yet, as Liesl helps shoulder the burden of running her family’s inn, her dreams of composition and childish fancies about the Goblin King must be set aside in favor of more practical concerns.

But when her sister Käthe is taken by the goblins, Liesl journeys to their realm to rescue her sister and return her to the world above. The Goblin King agrees to let Käthe go—for a price. The life of a maiden must be given to the land, in accordance with the old laws. A life for a life, he says. Without sacrifice, nothing good can grow. Without death, there can be no rebirth. In exchange for her sister’s freedom, Liesl offers her hand in marriage to the Goblin King. He accepts.

Down in the Underground, Liesl discovers that the Goblin King still inspires her—musically, physically, emotionally. Yet even as her talent blossoms, Liesl’s life is slowly fading away, the price she paid for becoming the Goblin King’s bride. As the two of them grow closer, they must learn just what it is they are each willing to sacrifice: her life, her music, or the end of the world.

Inspired by one of my favourite films of all time, Labyrinth, I met Wintersong with equal amounts of excitement and apprehension. It’s not a short book at 500ish pages, but it flew by…however, I don’t feel like I can say I loved it. In fact I’m really not sure how I felt about it and I finished it a couple of weeks ago!

Basically, The Goblin King steals away Liesel’s beautiful sister Kathe to lure Liesel to the Underground where he plans on making her his bride. Liesel has always dreamt of The Goblin King. She’s drawn to his beauty and his power, but also fears him. There is a passion between the pair but being The Goblin King’s bride means leaving her family behind and never setting foot overground again.

Wintersong was certainly cringe-worthy in places, and outright bizarre in others, and it never went where I thought it would which is a double-edged sword in that it’s good that it was unpredictable but bad in that I wanted things to happen that didn’t.

Overall, I enjoyed this strange, slightly melancholic tale that brought a new Goblin King into my life. I obviously pictured a young Bowie with a ridiculous wig and an even more ridiculous cod piece but that’s not the point (swoon). There were some deliciously dark moments in Wintersong, but the relationship between the MC and The Goblin King never truly felt right, not even in that ‘so bad but good’ way.

I do think Jae-Jones has written a lovely tribute to Labyrinth though, and I also loved the evident use of, and inspiration from Rossetti’s The Goblin Market which I’ve only ever read snippets of but now want to read in its entirety.

“We must not look at goblin men,
We must not buy their fruits:
Who knows upon what soil they fed
Their hungry thirsty roots?”
“Come buy,” call the goblins
Hobbling down the glen. 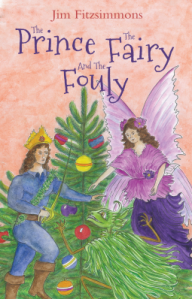 It’s Christmas and two tree decorations – cardboard prince Rudolph and clothes peg fairy Rosalind – are discarded for being too shabby. Christmas Eve magic brings the toys in the cupboard to life, and when they discover their two friends are not on the tree, they search for them. However, while they are away, a Fouly – the exact opposite of a Christmas Fairy – sneaks in and hides. Unaware of the evil creature’s presence, the toys return with Rudolph and Rosalind, who have also been transformed, and they all help prepare a festive feast. During this the Fouly steals Rosalind’s wand and uses it to kidnap Father Christmas… Rudolph and Rosalind go to rescue him, but they must first seek out Santa Lucia for the one thing Foulies hate the most: the Lucia Light.

Their mission takes them to the Fouly Castle, but they are captured and confronted by Malicia the Fouly Queen. Using the Light, they defeat Malicia, free Father Christmas and return home. But the Fouly follows, seeking revenge, and – backed by a fierce Holly Army – the battle for Christmas begins… Will the Fouly be defeated? Will Rudolph and Rosalind be thrown away, or will the gratitude of Father Christmas help them regain their places at the top of the tree?

The Prince, The Fairy and The Fouly is a charming adventure story which combines all the elements of a traditional Christmas tale with a variety of characters and situations that highlight the battle between good and evil.

Resplendent with beautiful black and white illustrations, it’s the perfect bedtime story for children aged 7+ in the run-up to Christmas, and an ideal stocking filler. Its large format and presentation make the book ideal for emergent readers.

I read this when I was ill in bed yesterday and it cheered me up immensely. I’m not sure that lengthy synopsis is really necessary though!

The story centers around two discarded Christmas decorations and their friends who come alive each Christmas Eve and host a party for Father Christmas. However, there are evil Foulies lurking and one of them is so jealous of the fun they are all having, he kidnaps Father Christmas, putting Christmas in Jeopardy for everyone.

This is a traditional story that I can easily picture families reading together at Christmastime. It has just enough danger and action to be interesting and just enough magic to be beautiful. But the main star here is definitely the illustrations. The illustrator has done a beautiful job and the cover really doesn’t do it justice. The Christmas pictures are dazzling and the Foulies are truly sinister with their spidery limbs and hairy coats.

I loved the monster’s ball and the resolution to the story, Fitzsimmons manages to cram in a lot of detail in very few words. I only really had one gripe – the cardboard Prince’s name, Rudolph – I felt might be a bit confusing for children especially when Rudolph takes Father Christmas’ reindeer to go and save him…or is it just me?

Anywayyyyy, if I had a 6-8 year old child in the family, I wouldn’t hesitate in buying this for them this Christmas, it would make a lovely present.

Disclosure: I received an advanced copy from the Publisher/Author in exchange for an HONEST review. Many Thanks!
Title: The Prince, The Fairy and The Fouly
Author: Jim Fitzsimmons
Details: E-book
Publication Date: November 4th 2013 by Troubador Publishing Ltd.
My Rating: 4/5
If you liked this try: Christmas Tales by Enid Blyton