I was trying to think of a fun post for today and I came up with this!

Seeing as I missed this week’s TTT which was all about your favourite heroines, I thought I’d share some of my favourite characters with you today.

Why not join in and do your own name (link me if you do)!

Laureth Peak (She is Not Invisible ~ Marcus Sedgwick): Laureth Peak thinks her father’s on the verge of a breakdown. He’s supposed to be doing research in Austria, so when his notebook shows up in New York, Laureth knows something is wrong. On impulse she steals her mother’s credit card and heads for the States, taking her strange little brother Benjamin with her. Reunited with the notebook, they begin to follow clues inside, trying to find their wayward father. Ahead lie challenges and threats, all of which are that much tougher for Laureth than they would be for any other 16-year old. Because Laureth Peak is blind.

Iseult (Tristan & Iseult ~ Various): Isuelt is the name of several characters in the Arthurian story of Tristan and Iseult. The most prominent is Iseult of Ireland, wife of Mark of Cornwall and adulterous lover of Sir Tristan. Her mother, the Queen of Ireland, is also named Iseult. The third is Iseult of the White Hands, the daughter of Hoel of Brittany, sister of Sir Kahedin, and eventual wife of Tristan.

Peter Pan (J.M Barrie): A mischievous boy who can fly and never grows up, Peter Pan spends his never-ending childhood having adventures on the small island of Neverland as the leader of his gang, the Lost Boys, interacting with mermaids, Native Americans, fairies, pirates, and occasionally ordinary children from the world outside Neverland.

Sarah Williams (Labyrinth ~ A.C.H Smith): 15 year old Sarah is on a quest to reach the castle at center of an enormous otherworldly maze, beyond the goblin city, to rescue her infant brother Toby, who has been kidnapped by Jareth, the Goblin King.

Yvaine (Stardust ~ Neil Gaiman): The fallen star. In Neil Gaiman’s Stardust, stars are living creatures. Yvaine appears to be immortal, but not invulnerable. She is pursued by the Lilim and the surviving sons of the Lord of Stormhold, who want her for their own reasons. When Tristran realises his love for her, he abandons his courtship of Victoria Forester, and Yvaine marries him despite their inability to interbreed. 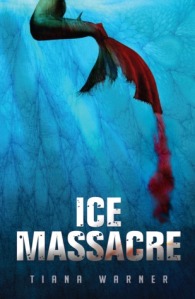 A mermaid’s supernatural beauty serves one purpose: to lure a sailor to his death.

The Massacre is supposed to bring peace to Eriana Kwai. Every year, the island sends its warriors to battle these hostile sea demons. Every year, the warriors fail to return. Desperate for survival, the island must decide on a new strategy. Now, the fate of Eriana Kwai lies in the hands of twenty battle-trained girls and their resistance to a mermaid’s allure.

Eighteen-year-old Meela has already lost her brother to the Massacre, and she has lived with a secret that’s haunted her since childhood. For any hope of survival, she must overcome the demons of her past and become a ruthless mermaid killer.

For the first time, Eriana Kwai’s Massacre warriors are female, and Meela must fight for her people’s freedom on the Pacific Ocean’s deadliest battleground.

I really enjoy stories that are rooted in mythology, and I haven’t read any based on mermaids so I was excited for this one.

Ice Massacre is centred around Meela who is just about to leave for the annual mermaid Massacre. She has been trained to be a warrior who will travel out to sea with nineteen other girls to fight the mermaids that have plagued Eriana Kwai for years.

The mermaids are beautiful and seductive, and use this seduction to enthral and kill men who come into contact with them. The Ice Massacre was once a man’s job, but this time it is girls that have been trained to kill in the hopes that the mermaid’s powers of seduction won’t work on them the same way, giving them an advantage.

I really enjoyed this book. It was completely action-packed. It started at a good pace and maintained it almost all the way through.

I liked that from the start we know Meela has a childhood secret that she keeps from her friends, and we then go back to when she was 10 years old to find out what it was.

It was a time when Meela had befriended a mermaid her own age, called Lysi. Lysi wasn’t evil like everyone said mermaids were. She was kind and fun, and Meela saw her in secret most days. Also at this time, Meela’s brother had still not returned from the previous year’s massacre, causing a lot of tension and sadness in their family.

This backstory was intriguing and suspenseful, and set up the present-day story well. I felt like I knew and understood Meela very early on, and I couldn’t wait to find out what had happened to her and Lysi’s friendship. But one thing was for sure – it was obviously not going to end well.

There were so many great moments in this book. I loved how vicious the mermaids were, and that Warner didn’t shy away from graphic violence, just as the title suggests. But it is also a great coming of age story. Meela must come to terms with her past, conquer her enemies, and learn how to trust again.

I think a lot of people will find something to relate to in this book, just as long as you can stomach the bloody massacre. I couldn’t get enough…and I get the feeling there is room for a sequel…