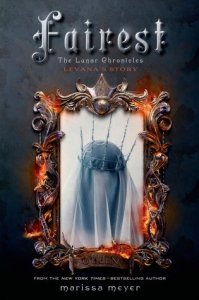 In this stunning bridge book between Cress and Winter in the bestselling Lunar Chronicles, Queen Levana’s story is finally told.

Mirror, mirror on the wall,
Who is the fairest of them all?

Fans of the Lunar Chronicles know Queen Levana as a ruler who uses her “glamour” to gain power. But long before she crossed paths with Cinder, Scarlet, and Cress, Levana lived a very different story – a story that has never been told . . . until now.

Marissa Meyer spins yet another unforgettable tale about love and war, deceit and death. This extraordinary book includes full-color art and an excerpt from Winter, the next book in the Lunar Chronicles series.

I was reeeeeeeeeeeeally excited about this book just because I always NEED MORE LUNAR CHRONICLES, but I also wasn’t sure if I wanted Levana’s back story. She’s such a great villian, I was worried this spin-off book would endear me to her or at least feel sorry for her.

But, I glad that I didn’t. Yes, in Fairest we see Levana as a teen and the events that helped spark the madness in her, but Levana was well and truly messed up before her story starts in this book.

Fairest is a fast-paced, often uncomfortable read about a haunted, complex character who chooses to use her gifts for her own gain, to the detriment of those around her… and that’s an understatement. Levana is one batshit-crazy, evil madam, even at the age of fifteen. I loved it!

If you’ve enjoyed the series so far, I’m sure you’d love this one too. It also gives us more information on Winter, the eponymous character of book four, so I’d definitely recommend giving Fairest a go before the release of that one. Let’s face it, we have time. TOO MUCH TIME! 😦

Fairest is available in paperback from Waterstones now. 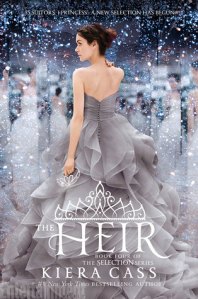 Princess Eadlyn has grown up hearing endless stories about how her mother and father met. Twenty years ago, America Singer entered the Selection and won the heart of Prince Maxon—and they lived happily ever after. Eadlyn has always found their fairy-tale story romantic, but she has no interest in trying to repeat it. If it were up to her, she’d put off marriage for as long as possible.

But a princess’s life is never entirely her own, and Eadlyn can’t escape her very own Selection—no matter how fervently she protests.

Eadlyn doesn’t expect her story to end in romance. But as the competition begins, one entry may just capture Eadlyn’s heart, showing her all the possibilities that lie in front of her . . . and proving that finding her own happily ever after isn’t as impossible as she’s always thought.

You should all be aware of my unashamed love of The Selection series by now. I can’t help it, they are just bloody addictive!

With that in mind, I probably should have been happy at the prospect of Cass carrying on the series with a new protagonist – Maxon and America’s daughter Eadlyn – but I kind of wasn’t. I was worried that the series had peaked. And I thought it was rounded-up satisfactory, so why drag it on, why milk it?

Well I’m pleased to say I needn’t have worried. The new generation of The Selection has everything I loved in the first three books. And man, it was just as addictive.

Since we last saw Maxon and America, Illéa has abolished the caste system, meaning anyone can do whatever job they like or marry who they like. With no reason to attack the palace, the rebels have disbanded, but the kingdom isn’t in as much peace as they’d hoped.

Jobs are sparse, and prejudices about who used to be what caste are still threatening to cause problems, leaving Maxon and America at their wits end. So what to they do? Beg their hard-nosed, Queen-in-training daughter to have her own selection, of course.

Will it bring peace to the Kingdom? Will Eadlyn warm to any of her suitors?

Seriously guys, if you liked the original books, there is no reason that you won’t like this one too. I found Eadlyn quite hard to warm to because of her stern demeanour, but it was more understandable as we get to know her.

I liked seeing the tables turn and watching the girl calling all the shots. It was refreshing, and I couldn’t put it down. OBVS. I totally wanted more Maxon/America action though. I kind of feel like it’s OK to fancy him now that he’s older…not that it stopped me before…

I’m hoping they’ll be more of an uprising within the Kingdom in the later books, because I think it needs that more serious side to it, but, overall, I couldn’t help but love this book.

The Heir is available now in paperback, from Waterstones.

Current Giveaway: Win a copy of The Violet Hour by Andrea L. Wells and/or a Kindle Fire HD here!!!!