The Invisible Hand is about a boy, Sam, who has just started life at a boarding school and finds himself able to travel back in time to medieval Scotland. There he meets a girl, Leana, who can travel to the future, and the two of them become wrapped up in events in /Macbeth/, the Shakespeare play, and in the daily life of the school. The book is the first part of a series called Shakespeares Moon. Each book is set in the same boarding school but focuses on a different Shakespeare play.

I’ve always really liked Shakespeare – even at school – which is strange because I remember hating most things I was forced to read for school. Shakespeare always seemed more interesting though. I enjoyed having to decipher the language to discover the meaning, but I also totally understand why people dislike it, and why children and young adults find it difficult.

I’m therefore always pleased to see more accessible books based on Shakespeare, and its modern-day retellings. The Invisible Hand is the first in a new series to be set in the same boarding school, with each book based upon a different Shakespeare play. In this case it’s Macbeth.

In this short novel, Sam is quite perturbed about his strange, vivid dreams where he finds himself in Scotland in what seems like medieval times. Whilst trying to make sense of the dreams, he’s also trying to keep his head down at the boarding school but is finding it increasingly harder to concentrate in the present day. Especially when the girl he has a crush on in his dreams starts to turning up at school.

Things get even weirder when Sam starts studying Macbeth in English and the events of the play bear more than a passing resemblance to Sam’s dreams that may not be dreams after all.

The Invisible Hand was a great introduction to Macbeth. It was a simple but action-packed story which uses some of the events in Macbeth and gives them a modern relevance. I enjoyed it a lot. It was fun and speedy. If I had one thing to criticise though, it would be that I wished Hartley had taken it further. I wanted more Shakespeare, more detail. It was too short!

The Invisible Hand has certainly piqued my interest however, and I would love to see what they do with other Shakespeare plays. I definitely think there is room for more Shakespeare inspired YA novels like this to show that it’s not all about archaic language and ruffled collars.

Welcome to my new post where I discuss any books that I read in the month which for one reason or another didn’t warrant a full review. This is a way for me to keep track of what I’ve read but without the pressure of having to write comprehensive reviews for them all.

I was much better this month and the only book I read and didn’t feel like reviewing in full was this:

This was the first Ruth Galloway book I’d read and at first it didn’t seem to make a difference that I hadn’t read the previous ones, but I think as the story went on it became evident that I would have enjoyed it more if I had. It’s for that reason that when I say I was little disappointed with this novel I don’t particularly think I can blame the book itself. It was a perfectly good crime thriller but I personally felt like the plot unfolded a little too slowly. Griffiths’ writing style was nice and effortless though, and I’d like to give the first book a go in the future.

I haven’t done a monthly round-up yet this year (my bad), so here’s a quick summary of both. In January I took a blogging break and only posted TWIB and one review anyway. When I returned in Feb I decided to make some changes in which I wanted to blog less and read more, and also blog to the mantra of quality not quantity. It’s really renewed my enjoyment of blogging and reading so far. Whoop! 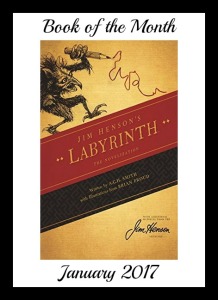 That’s it for this month. I should be back to my full monthly round-up next time. I also usually share my TBR update here but I haven’t looked at that since Christmas so there’s lots of additions (and a few subtractions) to make. I’ll do a separate post if I get time.