I’m not gonna lie, I didn’t know anything about this until the press release landed in my inbox. And man, I was pretty excited!

Thanks to a Kickstarter campaign and Felicia Day’s Geek & Sundry, Rachel Caine has adapted the first book in her Morganville Vampires series, Glass Houses, into a web series comprising of 8-12 minute long episodes, which began airing yesterday. 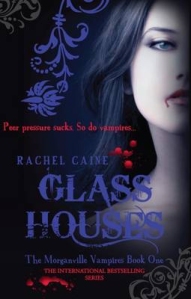 Web series have been hailed as the new big thing for a while now, with the ability to reach a worldwide audience faster than any other format. You only have to look at the success of I Kissed a Vampire, Dr. Horrible’s  Sing-a-long Blog or the endless Netflix and Amazon Prime series to see that the way we watch TV is changing.

This Halloween, Morganville: The Series hopes to make a splash in the world of Webisodes…

The entire show was filmed on location in Dallas, Texas, in four separate venues, including a coffee shop, a turn-of-last-century Victorian home, a hospital,and a university, and I’m assured that nearly every episode ends with Rachel Caine’s infamous cliffhanger endings. But at least this time we won’t have to wait too long to found out what happens next. Hurrah!

But, how do you cram a whole book into such a small series?

“The first thing I tried to do, since I wrote the book in 2006,” said Caine, “was to write down everything I remembered from it without re-reading it. That was fascinating, because what I wrote down was really the core story, and that turned out to be what needed to be told in the show.”

It’s also pretty hard to believe that the whole thing was filmed in just 10 days.

Glass Houses was our first introduction to Morganville – a town riddled with vampires. The book centers around Claire Danvers who doesn’t quite fancy slumming it in the college dorms, and is looking for a room. She finds one, and a lot more in the Glass House. We meet a whole host of fun, and some not-so-fun characters, who are intent on helping or hindering Claire in her quest to survive in Vamp town.

So, is the web series going to tell the whole story?

“For practical purposes, you can only have so many characters in a show with this running time, so some characters from the novel, while really interesting, ended up not being central to the plot (like Miranda). However, I did think it was important to introduce Myrnin, a fan favorite, into the mix early, so he makes a short appearance this season,” explains Caine.

Hold the phone, is that Amber Benson?

Yep. The awesome Amber Benson, who you should all know as Tara from Buffy TVS landed the role of Amelie – the sort-of vampire queen. PERFECT!

I really enjoyed these books and I can’t wait to check out the series. I plan on marathoning it on All Hallow’s Eve. Who’s with me?

In the mean time, here are the first two episodes to whet your whistle…