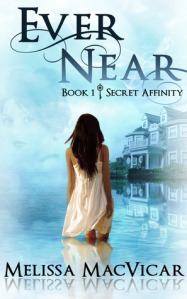 Love is ever near. But trouble is never far.

Nantucket Island is haunted, but only sixteen-year-old Jade Irving knows it. Ignoring the disturbing spirits isn’t an option, because one dwells in the enormous historic home she shares with her newly blended family. Jade is finding it more and more difficult to explain away Lacey’s ghostly, anguished tantrums, especially with Charlie, her gorgeous, almost step-brother, living right across the hall.

When a power-hungry ghost hunter tracks down Jade and blackmails her, Jade’s secret teeters on the edge of exposure, and her entire future hangs in the balance. If anyone finds out Jade can talk to ghosts, her life will be forever changed.

Can she save herself, free Lacey, and hang on to her tenuous connection with Charlie? Or will everything she ever wanted slip through her fingers?

I wasn’t sure if I’d enjoy this book as I’ve always found ghost stories a bit hit or miss. Done well and they can be chilling, creepy and utterly compelling, but done badly and they can be completely clichéd and cheesy.

Thankfully, Ever Near fell into the former category, and hit the mark for me.

Protagonist Jade is your regular 16 year-old girl who is having to adjust to separation from her father and her mum’s forthcoming second marriage, resulting in Jade and her mum moving into old mansion Fair Ever, with her soon-to-be step-father and brother.

Considering everything she’s had to adjust to, Jade gets on with her new family just fine – a little too well where her hot step-brother is concerned – but it’s the house that’s the problem. For years, Jade has tried to hide the fact that she sees ghosts, but at Fair Ever there is one very pissed off ghost that’s making it impossible for Jade to keep her secret.

There were a lot of things I liked about Ever Near. I thought MacVicar really nailed the tone throughout the book and Jade felt like a very ‘real’ character making her instantly likeable. I also thought it was written well and the short, sharp chapters really pulled me in and hooked me into the story.

Step-brother Charlie was just the right amount of swoon and I liked the dynamic between the two characters, but I wished they didn’t get together so quickly. One minute Jade was dead against the idea, because ‘it’s wrong’ and the next they were sucking face, but let’s put it down to teenage hormones, yeah?

Initially, I was a bit dubious of Jade’s paranoia about her secret getting out and wondered why she didn’t at least confide in her best friend, but the more this was explored the more I realised that it summed up adolescence pretty well; that need for self-assurance, acceptance and the fear that people might see you as different.

Overall I really enjoyed Ever Near. It is a super-quick, entertaining read with a nice balance of action from the violent ghosts, romance between Jade and Charlie, and coming-of-age issues that everyone can relate to.

Ever Near is available now in paperback and e-book, as is book #2, Ever Lost

All day I’ve had a weird craving for hot dogs. And so voila! #fridaynightin #noms #hotdogs #friedonionsareeverything