It’s that time of the year again, Folks. I’ll be sure to let you know what I have planned for this year’s Horror October in the next few days or so, but for now I’ll leave you with this… 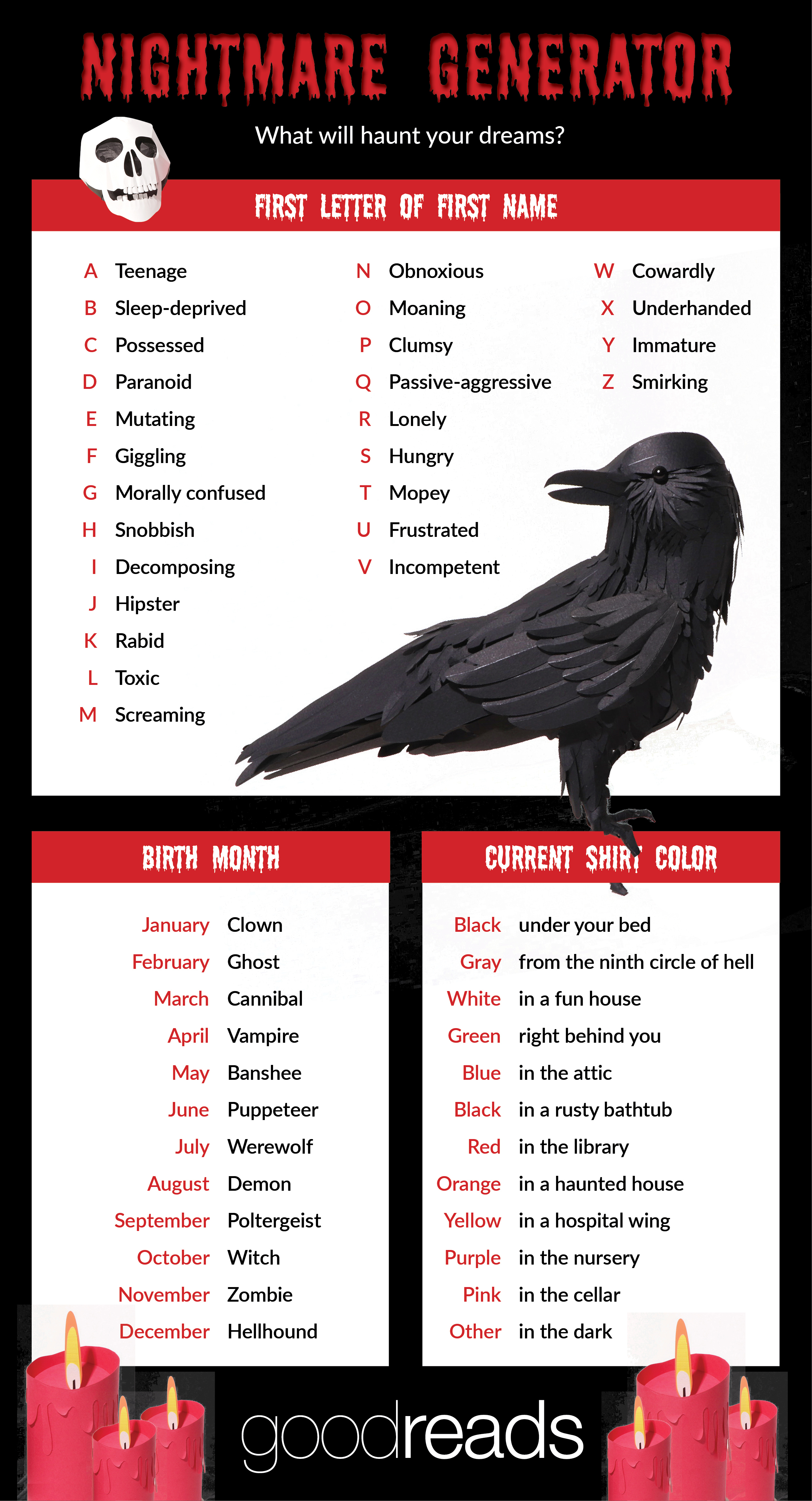 My nightmare is Toxic Clown under your bed. It couldn’t be more accurate. EEK!

Last year was my first full year of blogging, and like most book bloggers, I set myself some challenges. So, how did I do?

Hmm…not that great, but not toooooo bad either.

Here are the goals I set myself and how I did:

The idea of this challenge was to read some of the older books on my shelves that I never got round to – so I made a rule that only books I’d had for over five months counted. That was a mistake.
Goal: 11-20 books
Outcome: 7

I wanted to make time to reread some of my favourite books. These are the ones I chose:

I wanted to finish the following series:

So, a mixed bag! It could have been worse I guess.

I’m going for the minimal approach this year.

2. Reread Challenge: I still want to reread all of those on the list so I’m going to continue plucking away at that one.

3. TBR Challenge: This time, I’m going to make a list of all the books I have sitting on my shelves (which I will publish at some point) and just see how many I can get through. Whatever I don’t pick up, I WILL take to a charity shop at the end of the year.

Good Luck to us all!

Seeing as I don’t have a review for you today I thought I would just share my recent book joy.

I had the BEST book luck last week!

I won two books in Goodreads giveaways, was sent Endgame by James Frey, and won a new book of unseen David Bowie photos in a raffle.

Maybe I should play the Lottery this week?

How well do you really know those you love?

Jenny loves her three teenage children and her husband, Ted, a celebrated neurosurgeon. She loves the way that, as a family, they always know each other’s problems and don’t keep secrets from each other.

But when her youngest child, fifteen-year-old Naomi, doesn’t come home after her school play and a nationwide search for her begins, secrets previously kept from Jenny are revealed.

Naomi has vanished, leaving her family broken and her mother desperately searching for answers. But the traces Naomi’s left behind reveal a very different girl to the one Jenny thought she’d raised. And the more she looks the more she learns that everyone she trusted has been keeping secrets.

How well does she really know her sons, her husband? How well did she know Naomi? If Jenny is going to find her, she’ll have to first uncover the truth about the daughter she thought told her everything.

The house was silent. No sound of her parents getting ready for work, or her brother late for school. Were they punishing her for last night? She’d been out on a date when she should have been studying, and had a huge fight with her father. So where was everyone now? Why had her family disappeared?

Twenty-five years later the mystery is no nearer to being solved and Cynthia is still haunted by unanswered questions. Were her family murdered? Abducted? If so, why was she spared? And if they’re alive, why did they abandon her?

Then a letter arrives, a letter which makes no sense. Soon Cynthia begins to realise that stirring up the past could be the worst mistake she has ever made…

No Time for Goodbye was published in 2008 by Orion Books. Barclay’s new book, No Safe House is out now.

I am really starting to get annoyed about the Goodreads trolls. I’m a book blogger so I guess I take reading and reviewing books seriously to a degree, but man, some people need to chill the fcuk out.

I’ve personally been involved in two incidents thus far. Firstly, I said in a review that a book was ‘vampire erotica’ and someone felt the need to tell me that it was in fact paranormal romance. I didn’t particularly take offence to the correction, but it was worded in a way which annoyed me. And I just thought why bother!?

The second incident, however, really ignited the rage in me. I requested a book from Netgalley without realising it was the second book in a series. We’ve all done it, right? I didn’t enjoy the book very much, but I put it down to that fact, and made that clear in my review. I even made a point of saying that people shouldn’t be put off by my 2/5 rating.

Someone took offence to this and decided to leave this lovely comment:

I also received this book as a giveaway. Knowing it was a SECOND book, I bought the FIRST book and read it BEFORE I received the other book. It is NOT FAIR to rate the SECOND book so low because YOU did not take it on yourself to READ THE FIRST BOOK BEFOREHAND!!! It is NOT the author’s fault that you walked into the mist in the middle!!!”

Alright Sarah, Jeeze. Funnily enough, once I pointed out exactly what I’d said in the review I didn’t hear another peep out of Sarah. And the best thing was that the author got in touch and asked if I’d like her to send me the first book to find out how the story began. She obviously didn’t have as many issues with my review as Sarah did.

What does this have to do with James Frey? I hear you cry. I’m getting to it, bear with me.

The other thing I hate about Goodreads is when people leave ‘reviews’ or comments on books BEFORE THEY’VE EVEN READ THEM. I mean, why? You can’t have an opinion until you’ve at least started the book, right?

And that’s what brings me to James Frey.

Oh James Frey, I do love you. I know that a lot of people don’t though, for various reasons, and that’s fine. But is there really any need to fill the Goodreads page for his upcoming book with such vileness. Go take a look.

So it sounds a bit like The Hunger Games? What doesn’t. And while we’re on the subject do these people really think THG was an original idea? REALLY? Battle Royale, anyone? The Long Walk? The Running Man? Gah.

And no one seems to mention the whole concept of this series, probably because they have no idea about it. Each book is a piece of a puzzle that will link up to a Google map, incorporating social media into a global treaure hunt. Kind of a modern version of the Masquerade hunt. It’s explained better here.

I think it sounds awesome, but whatever.

So to sum up: I love Goodreads, BUT CAN YOU JUST STOP. You know who you are.

I just stumbled across this STUNNING cover over at http://aliceinreaderland.com and I can’t stop looking at it. It also sounds like everything I would want in a book…Scotland, Enchanted rings, a mysterious boy…can not wait.

Veronica doesn’t think she’s going crazy. But why can’t anyone else see the mysterious blond boy who keeps popping up wherever she goes? When her best friend, Mackenna, invites her to spend the summer in Scotland, Veronica jumps at the opportunity to leave her complicated life behind for a few months.

But the Scottish countryside holds other plans.

Not only has the imaginary kilted boy followed her to Alloway, she and Mackenna uncover a strange set of rings and a very unnerving letter from Mackenna’s great aunt—and when the girls test the instructions Aunt Gracie left behind, they find themselves transported to a land that defies explanation. Doon seems like a real-life fairy tale, complete with one prince who has eyes for Mackenna and another who looks suspiciously like the boy from Veronica’s daydreams. But Doon has a dark underbelly as well. The two girls could have everything they’ve longed for…or they could end up breaking an enchantment and find themselves trapped in a world that has become a nightmare.

DOON is loosely based on the premise of the musical Brigadoon, with permission from the ALan Jay Lerner Estate and the Frederick Loewe Foundation. Follow the journey at http://www.DoonSeries.com

Expected Release date is Aug 20th. Image and synopsis from Goodreads where you can also enter the giveaway!