I didn’t manage to post last Thursday, but to be honest I didn’t do much anyway, other than making a mini Gingerbread House and watching Frozen four times in two days. No, really.

Anyway, on to this week’s rundown…

As I mentioned in my first post, I’m putting together some Christmas hampers to give as presents this year. Everything is going to be made by yours truly, with the exception of the baskets/boxes (which I don’t have yet), and the jars!

This week, I made a start on making individual Christmas cakes by soaking the dried fruit in a whole bottle of cherry brandy, and a glug of honey brandy to boot. It smells amazing, and after a week I think it’s ready!

I know some people soak their fruit for months but I don’t think it’s necessary. I pour brandy over the cake afterwards anyway. More booze than cake is my motto at Christmas! This is the recipe I’ve roughly followed over the last couple of years. It’s one that doesn’t require soaking at all, but I still do.

I’d never made jam before, or even chutney, but was assured it’s quite easy, and it really was!

I wanted a ‘jam’ that was spicy to suit my Dad and Brother’s tastes, but was also Christmassy, so I combined two different recipes – this Nigella one, which is so simple, and I added some clove-studded apples to the mixture as it boiled, which I’d seen in a different recipe I was tempted to try.

I also used a few different types of chillies and preserving sugar instead of regular. At first I thought it wasn’t going to set, but after an hour cooling, and 30 mins in the fridge it firmed up and is a perfect consistency. The only fail – it only filled two of my jars so I had to make some more. But it was so easy it didn’t matter!

For the second batch, I added a whole lemon to the chillies (instead of the apples) and blitzed the whole lot. And I ran out of preserving sugar so just used regular. It came out just as good, and the lemon tastes really great with the chilli. This one’s my favourite. I might have to keep one for myself!

3. A Christmas to Remember

I read, and pretty much devoured this book! My review will be up on Monday, hopefully.

Everyone loves Christmas – don’t they?

Carrie Blake loves her job as a nanny but, while her friends are settling down, all of Carrie’s spare time is spent with other people’s families. Though it breaks her heart, her New Year’s resolution is to embark on a new career and fix her love life.

As Carrie starts her last job, she’s sure she’ll be going out on a high – the house is amazing , the kids are adorable, and she’s in charge of decorating the tree!

The only problem could be her boss… single-dad Adam Fletcher might be both handsome and successful, but he’s always working. Doesn’t he realise he’s missing out on precious moments with his son and daughter?

As Adam’s family arrive for Christmas including his sensitive sister, Sharon, and his fun-loving elderly Grandpa, Walter, Carrie realises that she might just have found the perfect allies in her quest to persuade Adam to loosen up. There’s still time for Carrie to make this the best Christmas ever… after all, Christmas is the time for miracles, isn’t it? Let the festivities begin!

I also posted my review of Dying for Christmas – an altogether different kind of Christmas read!

I’m such a sucker for those made-for-TV Christmas films. Seriously, I can’t get enough. Most of them are terrible, but in a really good way. And now and again you find some that are actually great, in nothing but a great way!

This week however, I watched One Christmas starring a very old and scary-looking Katharine Hepburn and THE FONZ. Sounds great right? Wrong. It was so, so bad, and not very festive at all. Avoid!

This week I also bought a new Christmas jumper which is AMAZING and I bought some red candles in the hopes that I’d find a cheap candelabra thing to put in the window but I couldn’t find one. Any ideas for my candles? There’s always wine bottles I guess. Bit boring though.

Up Next: More festive reads, my Christmas cake progress, and hopefully salted chocolate & cinnamon fudge gets added to my hampers. And I’m going to an ELF Quote-A-Long at my favourite cinema. Yessss!

Before I start, Happy Thanksgiving to all my American friends & visitors! 🙂

This week, the festive season really kicked off for me. My mum came to visit at the weekend and we just couldn’t NOT spend the whole weekend doing Christmassy things. I also completed stage one of my Christmas Hampers and enjoyed a Christmas film or three. 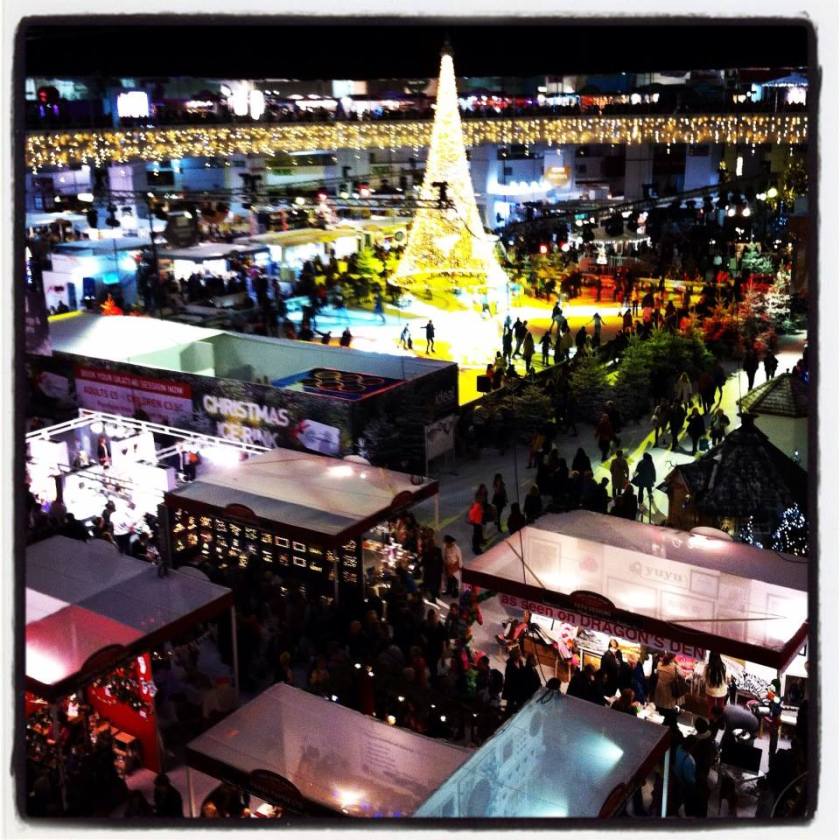 1. The Ideal Christmas Home Show: Thanks to a friend I managed to get two free tickets to the exhibition show at Earl’s Court. In theory it was beautiful and festive, full of Christmas gifts & decoration ideas and freebies. In practice, it was beautiful and festive, but it was also so rammed so you could hardly move through the stalls, never mind get your hands on the freebies. We still managed to have fun though. We hugged a snowman and drank many a mulled wine, so no real complaints here!

2. Southbank Christmas Market, London: My mum had never been to the Southbank so after I picked her up from Euston we had a wander along the Thames sampling the delights of the Christmas market they have there every year. They’ve changed it quite a lot this year, incorporating a huge cider lodge, a Christmas train (which looked quite pathetic to be honest), and also a Christmas tree maze which I was excited about, but it didn’t look worth £4! We tried some amazing toffee vodka, and enjoyed a steaming cup of mulled wine with brandy. Welcome to Christmas. 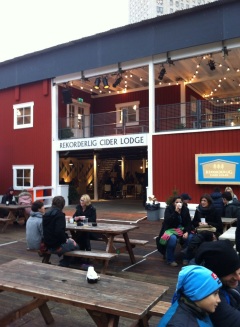 3. Decorating: You may think it’s too early, but it’s not! 😉 I have great childhood memories of decorating the Christmas tree with my mum. Since I moved to London I always miss that part of Christmas, as by the time I get back home, the tree and everything is already up. So on Saturday we decided to do some shopping and decorate my flat. It’s still not finished, but the tree is looking great. Thanks to Mumsy! 🙂

4. Too Many Festive Books?
While I was compiling my Top Ten Winter Reads for this year, I realised just how many festive books I’m planning on reading. And the list keeps growing thanks to you fellow bloggers! How many is too many??

5. Christmas Hampers: This year I’m buying very few presents, and instead have decided to give homemade hampers to family and friends. I thought about doing it last year too, but never got round to it and seeing as I got made redundant last month it makes sense to do it this year. But it’s not just about not having the money, I think spending time making something is a much nicer gift than anything I could buy. I just hope I can pull it off. The first stage was to pickle some onions, which I am now storing in a dark vault, to pickle away ready for Christmas. Find out what stage two consists of next week! 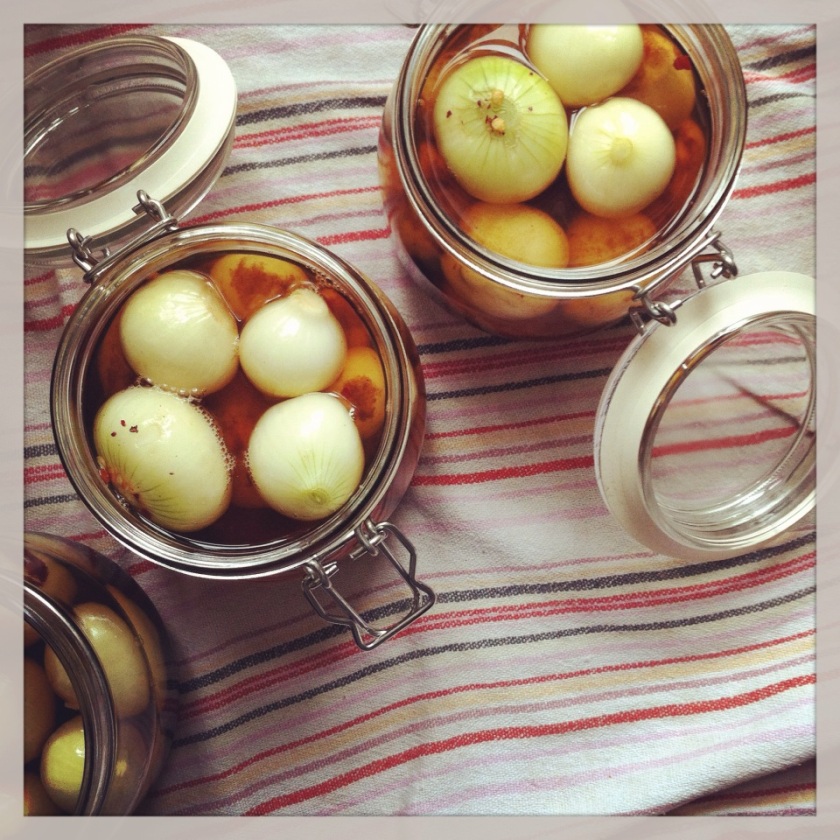 How are your Christmas preparations going? Let me know!

Also, I’m not sharing these posts on FB as I don’t want my family to see what I’m putting in my Christmas Hampers, I’m hoping they don’t check my blog that often (if at all)…if you do, LOOK AWAY ON THURSDAYS!!!