When notorious gangster ‘Fat Sam’ Mahood is murdered, the chief suspect is arrested nearby. But he seems to have suffered a breakdown. Incarcerated in a mental institution, he’s known only as the Man in the White Suit. The suspect remains an enigma until Nurse Brenda calls on Mystery Man, former patient and owner of No Alibis, Belfast’s finest mystery bookshop, to bring his powers of investigation to bear… However, before our hero can even begin, the Man in the White Suit is arrested for the murder of a fellow patient. But is he a double murderer or a helpless scapegoat? Intrigue, conspiracy, and ancient Latin curses all combine to give the Small Bookseller with No Name his most difficult case to date.

I’m a huge fan of Colin Bateman and have been slowly working my way through his extensive back catalogue since I read the first book in this series, Mystery Man, in 2009.

The books are centered around The Man With No Name, owner of mystery bookshop, No Alibi’s in Belfast. He is an unhinged, hypochondriac addicted to twix’s and Starbucks, and one of those characters that is absolutely hilarious to read, but if you knew him, he would be insufferable.

I’ve said it many times before, but the best way I can describe the man with no name is Bernard Black from Black Books, who inadvertently ends up trying to solve crimes, both big and small.

The Prisoner of Brenda started off with gusto and I was literally LOL-ing at every page.

Nurse Brenda asks Mystery Man for his help in finding out who killed Fat Sam Masood, in the hopes that he will clear her dumb-struck patient who just happens to be the chief suspect in the murder.

I must say, I loved the first half of this book, and as I said, it made me laugh so much, but I didn’t enjoy the mystery as much as the other books in the series, and so the second half was a bit of a disappointment.

Quite a chunk of this book sees Mystery Man incarcerated in the same mental institution as The Man in White Suit, and while, we can only imagine that he got himself sectioned on purpose, we’re never quite sure – afterall he is pretty insane on any normal day as it is.

I enjoyed that element of it, but it lost its magic for me when he begins to become more ‘normal’, due to lack of coffee and the dubious cocktail of drugs he buys on the internet. Much to my dismay, my interest started to wain.

However, there were some great moments. I loved the relationship between Alison and Mystery Man as much as I have in earlier books, and his mother provides a lot of black humour as always, especially when she almost kills poor Jeff (the hired help) with a lamp.

I finished The Prisoner of Brenda on a bit of a meh, but I’m still looking forward to more. It definitely remains one of my favourite series, and one that I urge people to pick up. This one just wasn’t my favourite of the bunch.

You can’t be brilliant all the time, right? Not that Mystery Man himself would ever agree with that!

All books in Bateman’s Mystery Man series are available now in paperback from Waterstones.

Colin Bateman is a legend. He has a huge amount of books in his back catalogue and the Mystery Man books are my absolute favourite. The first time I read this, I remember being on the tube and finding myself in fits of laughter and getting some very funny looks from the other passengers. I think The Bookseller With No Name is possibly one of the best fictional characters I have read (big statement – I know!).

Blurb: A superbly gripping and blackly funny mystery by the king of the comic crime caper.

He’s the Man With No Name and the owner of No Alibis, a mystery bookshop in Belfast. But when a detective agency next door goes bust, the agency’s clients start calling into his shop asking him to solve their cases. It’s not as if there’s any danger involved. It’s an easy way to sell books to his gullible customers and Alison, the beautiful girl in the jewellery shop across the road, will surely be impressed. Except she’s not – because she can see the bigger picture. And when they break into the shuttered shop next door on a dare, they have their answer. Suddenly they’re catapulted along a murder trail which leads them from small-time publishing to Nazi concentration camps and serial killers…

Many of Bateman’s characters are hilariously inept yet tenacious but Mystery Man is so perfect with his Irish wit and eccentricities. He’s a complete eejit, but you have to love him. He gets himself into the most ridiculous situations, and does some awful things, but y’know, his heart’s in the right place.

There are so many great lines in this book it’s hard to choose, but I have managed it, just for you:

“Bookselling is like prostitution, you sell your wares, you close your eyes, and you never fall in love with the clients. You also keep your fingers crossed that they won’t ask for anything perverted.”

“I gave her my hard look, which is like my normal look but harder. At this point, if she’d had any sense, she should have asked for ID, and I could have shown her my Xtravision card and my kidney donor card and dribbled off into the distance ranting about this or that, but as it happened my hard look proved more than adequate”

“Serial Killer Week got off to an inauspicious start when the opening wine and bean evening was invaded by a former prisoner who misinterpreted the poster, but he was at least able to give us the professional’s view of the genre.”

Also, I have a morbid fear of rates, and mice, and nettles and wasps and jagged cans and rotting food and damp newspapers and the unemployed.”

About Colin Bateman
Colin Bateman was a journalist in Northern Ireland before becoming a full-time writer. His first novel, DIVORCING JACK, won the Betty Trask Prize, and all his novels have been critically acclaimed. His book Murphy’s Law was adapted for the BBC television series Murphy’s Law (2001–2007), featuring James Nesbitt.

This post has also reminded me that this should be arriving sometime soon- completely funded by Kickstarter. 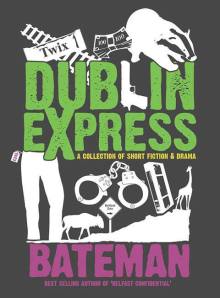 Colin Bateman’s first collection of short fiction and drama. Dublin Express is a collection of five rare short stories from one of Ireland’s most acclaimed novelists, together with the complete script of his hugely successful first play, National Anthem.

Also in the Mystery Man Series: