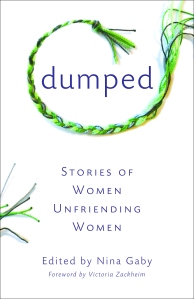 Getting dumped sucks—and no, we don’t mean by a significant other. We’re talking about the atom bomb of abandonment: Getting dumped by a best friend. Millions of women who know the universally-experienced-but-rarely-discussed trauma of being dumped by a close female friend can relate to the candid stories in Dumped: Stories of Women Unfriending Women.

The essays in Dumped aren’t stories of friendship dying a mutually agreed-upon death, like falling out of touch. These are stories of suddenly finding yourself erased, without context or warning. There should be an Adele song for this—and now, the millions of women who have cried over the inexplicable loss of a friendship can bond over the raw, charming, funny, and soulbaring stories of women who know how they feel.

From teenagers to soccer moms, teachers to friends, Dumped is for women who enjoy Bridesmaids as much as Little Women, or HBO’s Girls as much Anne Lamott and Alice Munro. It will make women ages 16-70 smile, cry, laugh, and best of all, say “Me too!” as they learn that being Dumped by a close friend doesn’t mean going it alone. 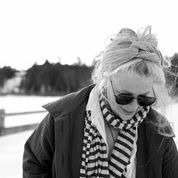 What People Are Saying About ‘Dumped’

Brilliant, charming, heartbreaking, truth-telling, soul-baring, extraordinary…I defy any woman
not to identify with at least one of these stories.”

—Amy Ferris, author of Marrying George Clooney and co-editor of Dancing at the Shame Prom