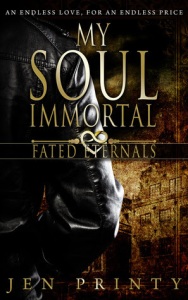 An endless love, for an endless price.

Jack’s immortality is exposed when he prevents a liquor store heist, forcing him to flee to protect his secret—a secret not even he understands. But when he meets Leah Winters—a mirror image of his decades-lost love, Lydia—his very soul is laid bare. He begins to question his sanity. Is she real, and if so, what does that mean for Jack and his secret?

Jack’s not the only mystery man in town. A stranger named Artagan hints at knowledge Jack is desperate to possess. But can he trust Artagan, or does the dark newcomer harbor deadly secrets of his own?

As Jack’s bond with Leah grows, so does the danger to her life. Jack must discover just how much he is willing to risk in order to save the woman he already lost once

My Soul Immortal was such a shock to me; I could not put it down, and found it to be a well-written, unique take on the paranormal romance genre, which let’s face it – gets pretty tiresome pretty quickly.

The first book in the Fated Eternals series introduces us to Jack. He’s tall and handsome, he loves books, and he’s immortal…what more could you want?

When Jack gets shot playing the hero in a robbery he has no choice but to pack his (minimal) belongings and choose a new place to live. He can’t risk being found out. A dart to a map decides his fate, and fate it really is, as once there he bumps into Leah (literally), who is the spitting image of his soul mate, Lydia, whom he has spent years trying to forget.

As Leah and Jack realise that their bond is stronger than anything they have ever known, and Leah finally understands that her weird dreams were in fact memories of her past life with Jack, they find themselves in increasing danger, and Jack is not prepared to lose her again.

Like I said earlier, I couldn’t put this book down. I read it in two sittings, over two days and I loved it! I thought the whole past-life, fated eternals thing really made this a different kind of paranormal romance story, and I loved that Jack was simply immortal, not a fang in sight. 🙂

The only slightly negative things I have to say about this book is that at first I thought Jack’s characterisation was a bit off – I think Printy struggled in writing from a male point of view and some of the things he said and thought about didn’t quite ring true to who he was. And the other, was that I didn’t write this review straight after finishing the book (my bad), and when I came to start it, it took me a while to even remember what had happened, so as much I enjoyed it at the time I can’t say it was a memorable read for me.

However, I do remember how hooked I was, and how much I enjoyed Jen Printy’s writing. I hope to read more from her; I wouldn’t hesitate to pick up the next in this series!