Greetings, blog-friends! Here’s what I’ve been up to this week. Better late than never, right? 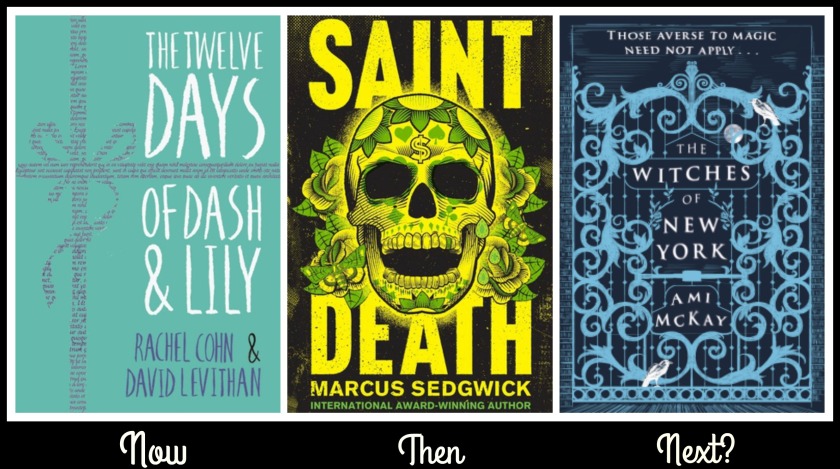 The Twelve Days of Dash & Lily is a quick, light read but I haven’t been swept away by it like I was with the first book. I’m also still going on my ‘lunch time’ (what’s that I hear you cry!?) read, The Enchanted. I managed about 2 pages today. Sigh.

It’s very rare I finish two whole books in a week, never mind three! But I lost myself in the first festive reads of the season and then moved on to the new Sedgwick. I liked all of these books a lot. I reviewed The Book of Kringle on Monday, and my review of Christmas Under a Cranberry Sky will be up tomorrow. Saint Death was the only (slight) disappointment, probably because I always have such high hopes for his books.  I’ll get my review up by Monday.

I think it has to be  The Witches of New York by Ami McKay which I should have read and reviewed abut a month ago. Bad blogger. Sorry, World.

Once again I’ve chosen this book based on the cover. It immediately got my attention. Sounds great, too!

Aspiring inventor and magician’s apprentice Felix Carmer III would rather be tinkering with his latest experiments than sawing girls in half on stage, but with Antoine the Amazifier’s show a tomato’s throw away from going under, Carmer is determined to win the cash prize in the biggest magic competition in Skemantis.

When fate throws Carmer across the path of fiery, flightless, one-winged faerie princess Grit (do not call her Grettifrida), they strike a deal. If Carmer will help Grit investigate a string of faerie disappearances, she’ll use her very real magic to give his mechanical illusions a much-needed boost against the competition.

But Carmer and Grit soon discover they’re not the only duo trying to pair magic with machine – and the combination can be deadly.

(Linking up with Stacking the Shelves)

I’m really not sure about this one but I was so intrigued I had to pre-order it. It arrived earlier this week….

In this gripping page-turner, an ex-agent on the run from her former employers must take one more case to clear her name and save her life.

She used to work for the U.S. government, but very few people ever knew that. An expert in her field, she was one of the darkest secrets of an agency so clandestine it doesn’t even have a name. And when they decided she was a liability, they came for her without warning.

Now, she rarely stays in the same place or uses the same name for long. They’ve killed the only other person she trusted, but something she knows still poses a threat. They want her dead, and soon.

When her former handler offers her a way out, she realizes it’s her only chance to erase the giant target on her back. But it means taking one last job for her ex-employers. To her horror, the information she acquires only makes her situation more dangerous.

Resolving to meet the threat head on, she prepares for the toughest fight of her life, but finds herself falling for a man who can only complicate her likelihood of survival. As she sees her choices being rapidly whittled down, she must apply her unique talents in ways she never dreamed of.

In this tautly plotted novel, Meyer creates a fierce and fascinating new heroine with a very specialized skill set. And she shows once again why she’s one of the world’s bestselling authors.

Greetings! Well, it’s back to business as usual after another hectic but wonderful Horror October. I still have a couple of reviews to post, but I’m taking it easy this week. I need a little resty….Here’s what I’ve been reading anyhoo…

Christmas Under a Cranberry Sky is the perfect light and fluffy read I needed after all that horror. I’m enjoying it a lot, and very happy that I chose it as my first festive read. I started The Enchanted before Horror October but had to put it away for a while so I’ll start on that one again too. It’s about a guy on death row who sees his world in a very interesting way.

I really enjoyed vampire novel Hunter of the Dead and my review will be up ASAP. Miss Peregrine was just OK. I’ll probably do a ‘Lazy Saturday’ review for it, but like I said, I’m taking it easy this week.

It’s back to regular old ARCs. I have quite a few to catch up on but i think I’ll choose either The Witches of New York by Ami McKay, or Saint Death by Marcus Sedgwick.

It was the cover that first drew me to this, but it sounds great too. I always meant to watch the TV show The Pinkertons but missed it. I’m sure this book will better anyway 😉 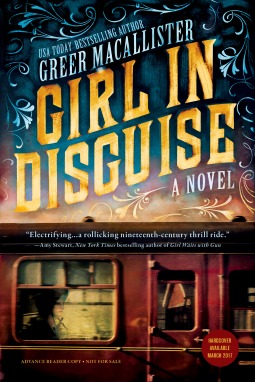 For the first female Pinkerton detective, respect is hard to come by. Danger, however, is not.

In the tumultuous years of the Civil War, the streets of Chicago offer a woman mostly danger and ruin-unless that woman is Kate Warne, the first female Pinkerton detective and a desperate widow with a knack for manipulation.

Descending into undercover operations, Kate is able to infiltrate the seedy side of the city in ways her fellow detectives can’t. She’s a seductress, an exotic foreign medium, or a rich train passenger, all depending on the day and the robber, thief, or murderer she’s been assigned to nab.

Inspired by the real story of Kate Warne, this spirited novel follows the detective’s rise during one of the nation’s greatest times of crisis, bringing to life a fiercely independent woman whose forgotten triumphs helped sway the fate of the country.

(Linking up with Stacking the Shelves)

Bought: I finally got round to buying Six Of Crows. I haven’t read the last book in the Grisha trilogy yet though so I’m not sure if I should wait to read that first…!?

Ketterdam: a bustling hub of international trade where anything can be had for the right price—and no one knows that better than criminal prodigy Kaz Brekker. Kaz is offered a chance at a deadly heist that could make him rich beyond his wildest dreams. But he can’t pull it off alone…

Kaz’s crew are the only ones who might stand between the world and destruction—if they don’t kill each other first.

My friend Dora lent me The Rest of us Just Live Here. We  love Patrick Ness and I’m told this is another good one from him! Looking forward to finally reading it.

What if you aren’t the Chosen One?

The one who’s supposed to fight the zombies, or the soul-eating ghosts, or whatever the heck this new thing is, with the blue lights and the death?

What if you’re like Mikey? Who just wants to graduate and go to prom and maybe finally work up the courage to ask Henna out before someone goes and blows up the high school. Again.

Because sometimes there are problems bigger than this week’s end of the world, and sometimes you just have to find the extraordinary in your ordinary life.

Even if your best friend is worshipped by mountain lions.

Award-winning writer Patrick Ness’s bold and irreverent novel powerfully reminds us that there are many different types of remarkable.