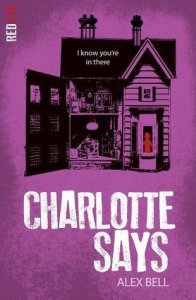 The much-anticipated prequel to the bestselling FROZEN CHARLOTTE, a Zoella Book Club title in Autumn 2016.

Following the death of her mother in a terrible fire, Jemima flees to the remote Isle of Skye, to take up a job at a school for girls. There she finds herself tormented by the mystery of what really happened that night.

Then Jemima receives a box of Frozen Charlotte dolls from a mystery sender and she begins to remember – a séance with the dolls, a violent argument with her step-father and the inferno that destroyed their home. And when it seems that the dolls are triggering a series of accidents at the school, Jemima realizes she must stop the demonic spirits possessing the dolls – whatever it takes.

Charlotte Says was a highly-anticipated read for me because I loved Frozen Charlotte, which was my introduction to the Red Eye series of YA Horror books. This one is a prequel to the first book. It’s basically the origin story for the events that occur in Frozen Charlotte, so you definitely don’t have to have read that one to enjoy this.

Here, we go back to Victorian times where we meet Jemima, a girl of sixteen, but of course considered an adult at that time. After an evidently troubled and mysterious past, Jemima accepts a teaching job at a boarding school for the destitute and wayward.

At first things appear to be OK (don’t they always?). Jemima is reunited with an old friend, and the girls seem to warm to her quickly, but the Schoolmistress, Miss Grayson is nothing if not an evil old wench who causes Jemima no end of grief from day one.

And then the dolls arrive. Followed closely by a dolls house. Jemima isn’t too happy to see them as they come from her previous home where, let’s just say, bad things happened, but because the girls have so little Jemima donates them to the school.

Then the madness ensues!

I’m not sure how much I liked this book. It had a lot more depth to it than its predecessor, but it was also a lot less fun, and a lot less scary. There were some great horror elements in there, along with some creepy moments, but I felt like it was lacking something. It didn’t have the impact that FC did, and I found that a bit disappointing.

I can’t fault Alex Bell’s ambition though, or her writing. I loved the setting and the slow reveal of Jemima’s past, but I felt the pace was too slow overall, and it just didn’t have the creep-factor of the first book.

I’m still excited about what this author does next though, she’s one to watch!