Happy Wednesday, blog friends! It’s been a scorcher of a week over here. I’m looking forward to Winter already, LOL. I don’t deal well in the heat! Anyway, I hope you’ve all had a good week.

I’ve only just started this thriller; so far, so good!

I really enjoyed this creepy tale about a family curse. My review will be up ASAP.

I’ve been saying White Cat by Holly Black for ages but still haven’t picked it up, so hopefully that!

Borrowed from the Library:

We just bought all of Bateman’s Dan Starkey and Mystery Man books at work, on my recommendation (yay!) and I haven’t read this one yet so had to borrow it! 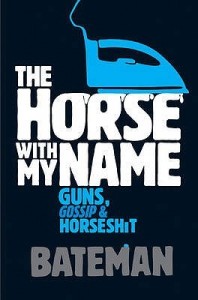 Dan Starkey – international man of inaction – rides again. How far can he fall this time?

Ex-journalist Dan Starkey is stuck in a grimy Belfast bedsit. His life is a disaster, and his only solace is the pub round the corner. He needs to get out more, particularly since the sessions at Relate with his wife Patricia have been cancelled and she’s hooked up with new man Clive.

Simple enough for a man with Dan’s experience, surely? But Trouble is Dan’s middle name. And trouble is what he finds…

…Shadowsong, because uhmmm… I’m not sure really. Wintersong was strange but I’m not sure how enjoyable it was. I think I need to give the second book a go though. Goblin Kinnnnng!

The conclusion to the gorgeous and lush Wintersong duology.

Six months after the end of Wintersong, Liesl is working toward furthering both her brother’s and her own musical careers. Although she is determined to look forward and not behind, life in the world above is not as easy as Liesl had hoped. Her younger brother Josef is cold, distant, and withdrawn, while Liesl can’t forget the austere young man she left beneath the earth, and the music he inspired in her.

When troubling signs arise that the barrier between worlds is crumbling, Liesl must return to the Underground to unravel the mystery of life, death, and the Goblin King—who he was, who he is, and who he will be. What will it take to break the old laws once and for all? What is the true meaning of sacrifice when the fate of the world—or the ones Liesl loves—is in her hands?

So that’s been my week in books, now why don’t you tell me about yours!?