Welcome to my new post where I discuss any books that I read in the month which for one reason or another didn’t warrant a full review. This is a way for me to keep track of what I’ve read but without the pressure of having to write comprehensive reviews for them all.

There are quite a lot this month because I took January off from blogging and read anything I wanted. It was great!

I got this book for Christmas and really enjoyed working my way through it. The text wasn’t anything spectacular but it was laid out well and the photographs and old gig posters/ticket stubs made it special. As a huge Bowie fan, I was surprised to see a few photos I didn’t recognise which is always a bonus.

Another Christmas book and one I had wanted for so long! I’m so glad I wasn’t disappointed. There were some notable changes from the film which made it fresh, but without a doubt the best part of this book is Jim Henson’s notes at the back and Brian Froud’s original sketches. A must for any fan of the ultimate ‘kids’ fantasy film.

I was really excited about this Alice in Wonderland tale (mainly because it looks so pretty tbh) but also quite apprehensive to start it. The Lunar Chronicles was amazing, and something that I thought shouldn’t work (Cyborg Cinderella), and I worried that maybe Meyer was churning out another retelling on the back of that success. I’m pleased to say that I was wrong and found Heartless to be an enjoyable origin story for the Queen of Hearts. There were some really great bits in it, but I felt it dragged in places. Not hugely exciting, but enjoyable enough.

It’s taken me a whole year to read this series. I was quite disappointed with the second book so I kept putting this one off but I’m glad I finally picked it up. The third and final book in The Grisha series was a vast improvement and I couldn’t put it down. I loved Alina’s character arc, and her complicated (and very different) relationships with Mal, Nikolai and The Darkling. It’s a vivid, dark fantasy world that Bardugo has created here using elements from Russian folklore, which is what sets it apart from other YA fantasy.

I’m not religious at all but I like to think I’m pretty open-minded and I’ve always been interested in alternative religions, especially those which worship nature rather than a person. I’m also a fan of Arthurian mythology so I figured this book would be an interesting read.

Unfortunately it wasn’t quite what I was expecting (which I guess was something along the lines of exploring Pagan values in the stories of Merlin and King Arthur). However, what I actually got was what seems to be an eccentric old lady who is frequently visited (in real life) by the wizard Merlin who guides her spiritually, and goes on describe how we too can befriend him if we try hard enough.

It just wasn’t for me and I couldn’t finish it.

January’s Spotlight Review was A Mother’s Reckoning by Sue Klebold.

Welcome to This Week in Books, where we share what we’ve been up to in bookland this week

Happy February! I’m back in action but with a much more relaxed approach to this blog. It all just got a bit too much. I’ll be posting about the changes soon. Good news is that I’ve been finding more reading time. Hurrah!

Here’s what I’ve been up to this week…

I’ve only just started these. Calling Major Tom is an ARC that isn’t out until June but has been released for early reviews. And I picked up The Time Machine during my break at work as we were discussing the origins of Steampunk in the writing group I run and I realised I’ve never read it.

I had to DNF the Merlin book. It wasn’t at all what I expected and just wasn’t for me. I also finished the last book in the Grisha trilogy which I enjoyed a lot! The second book wasn’t so great but this one really made up for it.

oh, so many since I last did the full version of this post. I’m doing a separate haul post for the weekend, but will resume listing any new books here from then on.

I love the sound of this dark thriller. The cover is wonderfully eerie too.

‘I was born two years into my mother’s captivity. She was three weeks shy of seventeen. If I had known then what I do now, things would have been a lot different. I wouldn’t have adored my father.’

When notorious child abductor – known as the Marsh King – escapes from a maximum security prison, Helena immediately suspects that she and her two young daughters are in danger.

No one, not even her husband, knows the truth about Helena’s past: they don’t know that she was born into captivity, that she had no contact with the outside world before the age of twelve – or that her father raised her to be a killer.

And they don’t know that the Marsh King can survive and hunt in the wilderness better than anyone… except, perhaps his own daughter.

Packed with gripping suspense and powerful storytelling, The Marsh King’s Daughter is a one-more-page, read-in-one-sitting thriller that you’ll remember for ever.

This week the topic is… Top ten books recently added to your TBR pile.

Well, this is a nice, easy topic, although I have been buying more books recently so it’ll be hard to choose just 10.

The Silent Songbird ~ Melanie Dickerson: I shouldn’t have requested this book because I knew I wouldn’t be able to get it read and reviewed by the pub date (today!) but I just couldn’t resist. I really fancy an epic historical YA. The opening line of the synopsis had me instantly…I mean castles =  DONE. “Evangeline longs to be free, to live in the world outside the castle walls. But freedom comes at a cost”

The Girl Who Saved Christmas ~ Matt Haig: You should all know by now that I love Christmas, and festive reads. I’ve wanted to read Matt Haig’s books for ages so this one was also impossible to resist.

The Twelve Days of Dash & Lily ~ Rachel Cohn & David Levithan: I didn’t even know this book was on the cards until I saw it on Netgalley. I loved Dash & Lily’s Book of Dares so I’m thrilled that these authors have got together once again for a sequel. This time, Dash and Lily’s brother have just 12 days until Christmas to cheer Lily up after her grandfather became seriously ill. Can they recapture the magic of Christmas in New York for her?

Shock and Awe ~ Simon Reynolds: This book chronicles the legacy of glam rock from the seventies to today and as such will heavily feature my hero, David Bowie. I don’t often read non-fiction, but I’m really looking forward to this one. 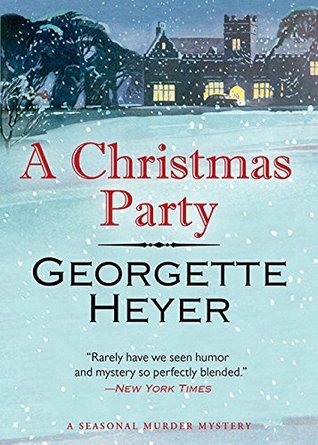 The Red Eye Box Set ~ Various: This set of four YA Horror books from Stripes Publishing arrived at the beginning of October. I’ve already read one of the books, Frozen Charlotte and really loved it so I hope the others are as good too.

A Christmas Party ~ Georgette Heyer: I picked this up from a charity shop recently. ‘Tis’ the season for…Murder‘ is the perfect tagline that enticed me.

City of Dark Magic ~ Magnus Flyte: I bought this book in an English bookshop I found in Prague. It sounds amazing.

“Once a city of enormous wealth and culture, Prague was home to emperors, alchemists, astronomers, and, as it’s whispered, hell portals. When music student Sarah Weston lands a summer job at Prague Castle cataloging Beethoven’s manuscripts, she has no idea how dangerous her life is about to become. Prague is a threshold, Sarah is warned, and it is steeped in blood.”

Six of Crows ~ Leigh Bardugo: This arrived just this week. I’ve heard nothing but good things about it.

The Rest of Us Just Live Here ~ Patrick Ness: It’s Ness. I don’t have to say much more. Other than perhaps my shame that I haven’t read it yet.

Koko Takes a Holiday ~ Kieran Shea: I think I can safely say that this will be my first ever Cyberpunk book. It sounds mad, in a good way. My friend Dora enjoyed it and passed it on to me.

Have you read any of these? What should I go for first?

The topic for this week is: Top Ten Books I can’t believe I haven’t read from X Genre…

I’m almost as bad at starting series than I am at finishing them. But the following books are ones that I do fully intend on starting…at some point…

1. The Giver Quartet ~ Lois Lowry: I’ll be honest, I hadn’t even heard of this series before the movie came out and I can’t believe how long ago it was released. I’m very intrigued for that reason alone, so I’ve avoided the film thus far.

2. The Grisha ~ Leigh Bardugo: I’ve heard so many good things about this series and people have told me I’d love it.

3. Splintered ~ A.G Howard: I’ve enjoyed some re-imaginings of Wonderland before, and this one sounds great. Plus, the covers are awesome.

5. Matched ~ Ally Condie: I got the first book in this series from the YALC book swap last year, but I just haven’t got round to it yet.

6. Young Elites ~ Marie Lu: I haven’t read any Marie Lu yet and this series sounds full of action.

7. The Magisterium ~ Cassandra Clare and Holly Black: I’m intrigued by this collaboration!

8. Snow Like Ashes ~ Sarah Raasch: The cover! That is enough of a reason to want this series.

9. The Children of Camelot ~ Donna Hosie: I love, love, love Arthurian lit, so a YA series based on that = slobber.

10. Rebel Belle by Rachel Hawkins: I’ve wanted this since it was released. Everything about it just screams awesome.