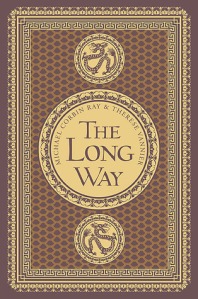 Synopsis:
Take flight to China’s Opium Wars of the mid-nineteenth century in this epic historical fantasy. Young orphan Leung Chi-Yen, born into the seedy world of Canton brothels, finds an opportunity to escape her fate during the chaos of British attacks on her country. Along with an unreliable monk from the fallen Temple of Seven Dragons, she journeys to North America at the time of the gold rush, the Indian wars, and the taming of the Wild West. Can she forge a new life for herself in this strange, dangerous world? And what about that mysterious Chinese dragon that has followed her so far from home?

What People are saying about The Long Way:

“I don’t think there’s a summary in the world that could have done The Long Way justice.”
– Hollie, Goodreads

“The only thing missing from this book is a sequel, as I was very sad to see it end.”
– Debby, Goodreads

Michael Corbin Ray and Therese Vannier have been friends since the mid-’90s, when they worked together at a series of imploding newspapers. After the death of journalism, they founded and ran a small marketing business for a number of years before falling for the siren call of Hollywood and screenwriting. Their first project was inspired by a bad dream, which should have been a warning to them.

While they share a love of stories, they come at it from different angles. Therese was raised on a diet of schlocky horror and martial arts movies from the ’70s, while Michael served time as an English major and occasionally aspires to commit literature. Their writing process often devolves into an argument over how much blood is too much blood.

They also share a fascination with the sciences, biology in particular. Therese studied marine biology and spends as much time in the water as possible. Michael has a degree in ecology and evolutionary biology, but prefers to keep his feet dry. They find common ground in birds.

After many years educating themselves on the long odds of ever getting a screenplay produced (anybody have a few spare tens of millions of dollars lying around?) they decided to switch to books. They now have a big backlog of stories to tell in this newfangled format. The Long Way is their debut.

Get Your Hands on a Free Copy!

Or you can enter the Goodreads giveaway here.