I started doing ‘lazy Saturday reviews’ as a way of getting reviews done in just 30 mins, and they proved to be quite popular. They are quick and snappy, and concentrate less on the plot (or content) and writing and more on my overall feelings about said book. They generally end up being a bit of a rant. My fave!

Greece in the age of heroes. Patroclus, an awkward young prince, has been exiled to the court of King Peleus and his perfect son Achilles. Despite their differences, Achilles befriends the shamed prince, and as they grow into young men skilled in the arts of war and medicine, their bond blossoms into something deeper – despite the displeasure of Achilles’s mother Thetis, a cruel sea goddess. But when word comes that Helen of Sparta has been kidnapped, Achilles must go to war in distant Troy and fulfill his destiny.

Torn between love and fear for his friend, Patroclus goes with him, little knowing that the years that follow will test everything they hold dear.

I have to cover this book in a ‘Lazy Saturday Review‘ because I loved it so much I don’t think I could produce an actual, balanced review. I just want to gush about it.

After only a few chapters in I was annoyed with myself for not reading this when it first came out! I’ve always loved mythological stories but despite owning a copy of The Iliad for about 10 years I’ve never read it. Like most people though, I thought I knew the story of Achilles, the kind but brutal warrior, but Miller’s version was both familiar yet surprising, and I loved every second of it.

The Song of Achilles is a beautifully written story of war, love, betrayal, and tragedy, written from the perspective of Patroclus best friend and lover of Achilles, making this version of the legend more human than it is God-like. I loved seeing Achilles through Patroclus’ eyes. With all of his faults, Patroclus’ love for the half-God warrior never wavered and he was the true hero of the story.

Miller effortlessly incorporates the Greek Gods into this very human story making the likes of The Iliad seem much less of a challenge. I really will pick it up now! I also can’t believe this is her debut novel – it reads as if she’s been honing her skills for years – that being said, I did read somewhere that it took her ten years (or so) to write. I for one, am eternally grateful that she persevered.

The Song of Achilles excited me, made me swoon, made me angry, and made me cry. It’s a book I now need to buy so I can read it again. ALL THE UNICORNS.

Happy Wednesday to you all. I just got back from a long weekend in Prague which is so beautiful I didn’t want to leave! I may well do a little post on it at some point. Unfortunately, that does mean that once again I haven’t got much reading done.…

I’m enjoying Daughter of Smoke of Bone a lot but I haven’t got through much of it. I’m also still reading A Million Little Pieces in  the few and far between intervals at work

Then:  The Song of Achilles  ~ Madeline Miller

LOVED!!! Review will be up soon.

Probably The Hummingbird’s Cage as it’s my next ARC deadline. 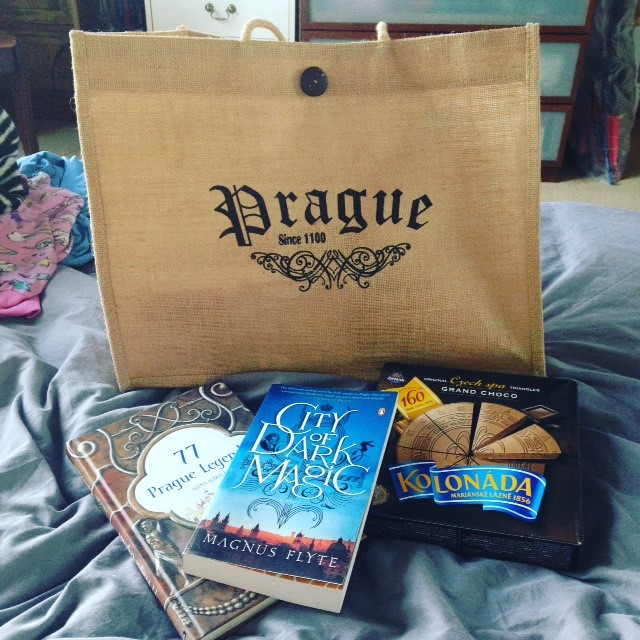 Once a city of enormous wealth and culture, Prague was home to emperors, alchemists, astronomers, and, as it’s whispered, hell portals. When music student Sarah Weston lands a summer job at Prague Castle cataloging Beethoven’s manuscripts, she has no idea how dangerous her life is about to become. Prague is a threshold, Sarah is warned, and it is steeped in blood.
Soon after Sarah arrives, strange things begin to happen. She learns that her mentor, who was working at the castle, may not have committed suicide after all. Could his cryptic notes be warnings? As Sarah parses his clues about Beethoven’s “Immortal Beloved,” she manages to get arrested, to have tantric sex in a public fountain, and to discover a time-warping drug. She also catches the attention of a four-hundred-year-old dwarf, the handsome Prince Max, and a powerful U.S. senator with secrets she will do anything to hide.
City of Dark Magic could be called a rom-com paranormal suspense novel—or it could simply be called one of the most entertaining novels of the year.

So, that’s my week in books, now how about yours?