Join me for 30 Days of Horror in which we spotlight one horror book for each day until we reach Halloween!

For obvious reasons, everyone is talking about IT at the moment, so because I’m like a petulant child who has to be different I’ve chosen Under the Dome for today’s 30DOH pick.

I’ve read this book twice, and if you’ve seen the size of it that should speak for itself. I thought it was great. Don’t even think about watching the TV series. That did not do it justice. I’d go as far as to say let’s just forget that ever happened… 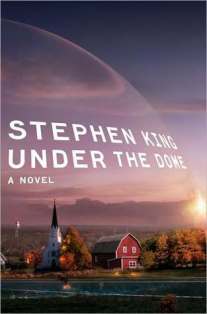 Available in all formats, 1074 pages

On an entirely normal, beautiful fall day in Chester’s Mill, Maine, the town is inexplicably and suddenly sealed off from the rest of the world by an invisible force field. Planes crash into it and fall from the sky in flaming wreckage, a gardener’s hand is severed as “the dome” comes down on it, people running errands in the neighboring town are divided from their families, and cars explode on impact. No one can fathom what this barrier is, where it came from, and when — or if — it will go away.

Against them stands Big Jim Rennie, a politician who will stop at nothing — even murder — to hold the reins of power, and his son, who is keeping a horrible secret in a dark pantry.

But their main adversary is the Dome itself. Because time isn’t just short. It’s running out.

Have you read it? What did you think?

Up Next on Horror October:

This Week in Books.

Favourites Fridays:
Most Fridays I have been posting about my favourite books or authors

Books Purchased:
I’ve been really good this month. And when I say good, I mean broke.

1. Pollen by Aaron Lamb (Kindle Edition) A friend of a friend of mine wrote this. Amazon £4.11
2. Fearless – The Story of Samantha Smith by Devon Hartford (Kindle Edition). Currently only £0.74 on Amazon
3. Beginning of a Hero (Legends of Windmere) by Charles E. Yallowitz (Kindle Edition) This was free on Amazon but is now just £0.77

*MY COVER OF THE MONTH* 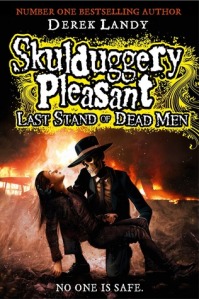 This was released on the 29th August, but I haven’t been able buy a copy yet so it’s the one I’m most looking forward to in September.

I’ve read some pretty bad reviews of the TV adaptation of Stephen King’s Under the Dome but I’m really intrigued to see it. I used to be a fan of his when I was a teenager but I feel like I kind of grew out of it or something (which is hilarious when you consider which books I love to read now *cough* Twilight *cough* The Selection). So I was surprised by how much I loved Under the Dome. Here’s a review I wrote some time ago for some website or other.

As far as Stephen King fans go, I’d say I’m barely on even the spectrum. I’ve never really trusted him as an author since that part of It when it just goes batshit, (you know the one…right?) or the end of Cell which was such a let-down I wanted to throw the book out of a window and demand the twelve hours of my life back that it took me to read it. He seems to have a problem with endings, that or I just have a problem with his endings.

So when it came to UTD – a mammoth tome even by King’s standard – coming in at over 1000 pages, I was understandably hesitant. I’d given him a wide berth since Cell but one trusted friend plus one enthusiastic book seller convinced me to give it a go, and once I’d got past the quite frankly daunting list of characters that would give George RR Martin a run for his money, the opening chapter had me hooked with a capital H.

UTD is the story of Chester’s Mill, Maine; a small, relatively normal town which is suddenly enveloped by an invisible and seemingly indestructible dome. The dome not only cuts the inhabitants off from the rest of the world but also hacks off a few body parts and slices a woodchuck in two in a suitably bloody fashion as it slams down. As you’d expect, panic ensues and the pages actually fly by.

At its core, UTD is a story about a community and its power struggles, and I almost hate to say it – politics. Like all good microcosms of society there are good guys and bad guys and their varied reactions to the bizarre situation leads to incidents of rape, arson, murder, even a bit of Necrophilia, and thanks to King’s stunning characterisation it’s all entirely believable, enthralling, and disturbing.

I might have to rethink my trust issues; I even enjoyed the ending. A lot.

I’ve only read this once, because y’know- long! but I’ve been longing to read it again ever since I finished it which is a sign of a true favourite.