After moving from stuffy Washington D.C. to laid back San Diego, Samantha Smith hopes to shed her troubled past and reinvent herself as a freshman at San Diego University.

Her parents are pressuring her to major in Accounting, because it’s the safe thing to do. But Samantha really wants to try something more adventurous, and secretly dreams of ditching the business major to study Art instead.

When she crosses paths with a handsome tattoo-clad bad boy, her life is turned upside down, and Samantha finds herself with more adventure than she ever dreamed possible.

This was the first book I downloaded to Kindle for free and it’s taken me this long to get round to reading it. And, to be perfectly honest, the only reason I picked it up now, was because I wanted a fun, trashy beach read for my holiday.

Woooo, is all I can say – Fearless was so much better than I expected; I couldn’t put it down, and it was the PERFECT selection to escape with on a hot, sweaty beach.

Sam Smith has issues. Secrets that she hasn’t shared with anyone, not even her family, and this burden has changed her as a person. Not only is she closed off, but she also overcompensates for whatever it is that she’s done by making her parents happy and going to school to become an accountant, even if it’s the most boring career she can think of.

Everything is going fine until she spills boiling coffee down herself whilst driving, and almost hits another car. The driver is not happy and becomes aggressive towards a traumatised Sam. Enter Adonis, yes you heard that correctly, Adonis [insert laughter and eye-rolling here]!

It’s not really as simple as hunky god-like, motorcycle-driving, tattooed bad-boy saves the day, and falls for serious Samantha, who then have hot, rampant sex. But it’s not far off.

However, what was surprising about this book, was how invested I became in the characters. Adonis, who thankfully goes by a much less ridiculous name later in the book, is a dark, brooding type with ghosts of his own. I loved that we very slowly see his softer side, and watch his shell peel off, layer by layer. I’m sorry, but a man with tattoos who cries in your arms…hot right? I also loved the whole artist thing, and found his relationship with his famous artist dad really interesting.

Fearless isn’t the type of book I read a lot. I was expecting a lot more sex, and a lot less intrigue, which I think is why I enjoyed it so much. It had layers!

Sam and Christos (yeah OK, so it might have reminded me of Frozen a lot, but it’s still better than Adonis!) might just be my new favourite book-couple. I need to find out what they get up to next, and what Christos’ deal really is!

Fearless, is still available to download for free, at Amazon! 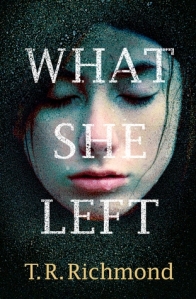 When Alice Salmon died last year, the ripples were felt in the news, on the internet, and in the hearts of those who knew her best.

But the person who knows her most intimately isn’t family or a friend. Dr Jeremy Cook is an academic whose life has become about piecing together Alice’s existence in all its flawed and truthful reality.

For Cooke, faithfully recreating Alice’s life – through her diaries, emails and anything using her voice – is all-consuming. He does not know how deep his search will take him, or the shocking nature of what he will uncover…

I was really looking forward to a gritty crime thriller after a string of YA reads, and I thought What She Left would be just the thing, but unfortunately it didn’t quite live up my expectations.

Alice Salmon was a good-time girl who liked to party a little too hard. When she’s found dead in the river, no one is quite sure what to believe; suicide, a tragic accident, or something more sinister altogether. What She Left pieces together Alice’s life and repercussions of her death on those that knew her.

The premise of this book is great, and I can see what the author was attempting, but it really didn’t work for me, and I put it all down to the format. We only discover what has happened to Alice through her digital and recorded footprint; her facebook posts, her tweets, email conversations, blog and diary entries, letters, and newspaper articles.

The idea is that Professor Cooke, of whom we’re not quite sure of his true intentions or of his relationship with Alice, is collating all of this information as some kind of experimental research – can we really know someone solely from what she left behind?

It’s an interesting hypothesis, and I was really determined to get to the end and find out what did happen to Alice, but let me tell you, it was such a chore. Using such a huge range of formats made What She Left feel very disjointed to me, and so much of it I just wanted to skip.

Also, I felt like all the letters were completely unbelievable. They made no sense, as the actual content of them seemed like nothing anyone would write to someone else. They tended to rehash whole conversations, and jump from one event to the next telling only half the story of each. It was so frustrating.

I thought the format got in the way of me getting to know the characters too, which considering that the idea was for Alice’s digital footprint to tell us who she was, was quite ironic. Her diary entries told me very little of her actual personality and essence, which made it hard for me to care what had happened to her. But saying that, I did keep on reading, so I guess the author was successful in that respect.

I didn’t hate this book, I just wish the format had worked better. Maybe it’s just not for me, as I’ve seen some good reviews of it already. If you like the idea of a story told through various mediums, then you should give it a go.

The hardback is available to pre-order from Waterstones now.