Welcome to the second annual flash fiction battle in which four brilliant independent horror authors will battle it out to be crowned the King or Queen of Horror, (well, Horror October at least).

For the past week and a half, the four participating horror writers have been creating an original short story based on the theme you chose.

The winning theme was ‘Master of Cemeteries’, and the stories have started rolling in. Once all four have been published, the vote will open for you to pick your favourite. I will crown the winner on Halloween!

Without further ado, feast your eyes on Entry #1.

Please do let us know what you think in the comments below. Will this story get your vote?

She tucked her face into her husband’s neck, rubbed her nose into his flannel collar, then kissed his unshaven cheek before leaving a coffee filled thermos and ham sandwich with him. The coffee would get drank. She had her doubts about the latter, noticing Ben’s flannel hanging loosely from his body. Everything had changed so quickly for them.

But she knew Ben was right. It was his job as the caretaker of Cedar Grove Cemetery to do the work that had to be done. She took a moment to gaze at the purple streaked sky before firing up the family’s 2001 Plymouth Neon, the one that fought to remain forest green against the orange colored rust, and thought about how proud she was to have Ben Taylor as her husband.

Ben picked up the plastic grocery bag his wife had left him and took a squat next to the pile of dirt where he left his spade. He unscrewed the thermos cap, poured, and sipped black coffee during the chilly October twilight.

Across the street, he heard children laughing, screaming, yelling “trick or treat!” at the top of their little lungs. Visions of toddlers dressed as dinosaurs, spacemen, princesses flashed through his mind. Huddled together in small groups, holding the hands of their Mom and Dad, only to let go once they were close to a walkway that led to the porch. Then, a full on joyous sprint, high-pitched screeching, heavy breathing, wide smiles. Plastic bags decorated with witches and castles and bats and cartoonish looking boogiemen being whipped open. More smiles as handfuls of sugary goodness fell into those bags. Bags that Mom and Dad would surely have to go through once darkness fell.

He picked up the sandwich his wife had left him and unwrapped it. He put it to his nose and smelled it. When was the last time he ate? Ben couldn’t remember. He hadn’t eaten in so long that Ben wasn’t sure if he even liked ham anymore, let alone sandwiches.

He took a greedy bite anyway. He chomped around for a few seconds before spitting it out. He wasn’t ready to eat. Not yet. Maybe later.

The sun fell faster and soon it would be dark. If Ben didn’t get a move on, he’d be working by the light of the lantern. This was okay by him. He wanted to hear the children a little longer.

The moon was almost visible now, a large white china plate hanging in the darkest sky imaginable. Gray, elongated clouds hovered in front of it. They were so close to each other they almost touched. Crickets began chattering to one another in the copse of trees close to where Ben was. Every now and then their chirps drowned out from the call of an owl. The children’s voices from across the street became nothing more than an echo. Ben picked up his spade and began to work.

He had done this so many times before. He tried to convince himself this was just like all the others. But he couldn’t fool what the heart knew. Trying to move on, to push through, was something he and his wife would have to learn as they lived. But Ben needed something to hang on to, something he could feel.

He took a moment to give his hands a break. They began to bleed in the cracks of his palms. He removed his flannel and wiped sweat from his face. When he exhaled he saw his breath and the cool air felt good. He straightened his back and glanced down and regarded the missing pooch from his beltline.

“Heck of a way to lose weight, Ben,” he said. “Didn’t even have to exercise.”

Then it came to him.

…“Running! Look Daddies! I’m running!” Bobby is running all right. He’s running in the backyard. His arms are outstretched along with his chubby hands. He is smiling and his head is tilted back so his eyes are squinting into the sunlight. White light enhances the child’s blonde hair, mainly at the flared ends where the wind has caught them, forcing them to flap like little wings…

“Daddies, I spin.” Bobby holds his arms up. Daddy grabs a hold of Bobby’s hands and asks him if he’s ready. “Readies,” Bobby says with a nod and a grin. Daddy plants his feet into the tall, soft green grass and begins to spin. Bobby’s feet lift from the grass and into the air. Their eyes lock onto each other. In the corners of their eyes, the world is spinning in a kaleidoscope of color: green, blue, white, brown. Daddy’s worries vanish in that moment. The envelopes stamped with PAST DUE in red letters, asking the cashier to return the snack cakes and bubble bath at the register to prevent an overdraft (just the necessities on this shopping trip, Bobby. Sorry), the anxiety from watching the price screen on the fuel pump go higher and higher are all forgotten in the whirlwind…

“Daddies, look! I fall.” Bobby falls down. “Daddies! You fall…too!” Daddy also falls, right on his back. He looks over at Bobby who has his arms once again stretched out to his side. Daddy does the same. They face each other, make eye contact and smile. Together they raise their feet to the clouds then watch the sky as the dizziness slows…

Ben finds that memory in the darkest of moments, one that he will hold on to for the rest of his life, as he spills the last of the dirt onto the gravesite with the tombstone marked:

Influenced by Stephen King and Rod Serling, Sean Seebach has written four books: A Looking in View, Autumn Dark, Our Monsters Are Real: The Pig Man and his latest release Unknown Vol 1.

When Sean isn’t writing or managing a wonderful barbecue joint with amazing people, he enjoys reading, cooking, and listening to rock n’ roll. He currently lives in Ohio with his wife, daughter, and son. 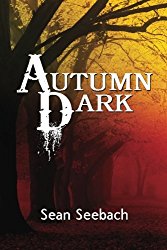 Huge thanks to all four writers, especially Stephen for helping to coordinate.