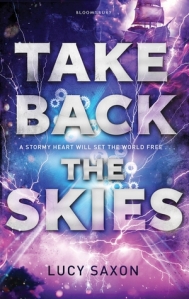 Title: Take Back the Skies
Series: Take Back the Skies #1
Author: Lucy Saxon
Edition: e-book, 496 pages
Published: June 5th 2014 by Bloomsbury Publishing Plc
Genre(s): YA; Fantasy; Steampunk
Disclosure? Yep, I received a copy via the author/publisher in exchange for an HONEST review.

Catherine Hunter is the daughter of a senior government official on the island of Anglya. She’s one of the privileged – she has luxurious clothes, plenty to eat, and is protected from the Collections which have ravaged families throughout the land. But Catherine longs to escape the confines of her life, before her dad can marry her off to a government brat and trap her forever.

So Catherine becomes Cat, pretends to be a kid escaping the Collections, and stows away on the skyship Stormdancer. As they leave Anglya behind and brave the storms that fill the skies around the islands of Tellus, Cat’s world becomes more turbulent than she could ever have imagined, and dangerous secrets unravel her old life once and for all . . .

I wasn’t sure what to expect from Take Back the Skies. I’d read a few unfavourable reviews, and found out that the author is only 19, 16 when she started writing the novel, which I realise I shouldn’t let sway me before even opening the book, but of course it does!

Then I started reading, and it was good. Really good! I was hoping to skim-read it because I’ve fallen behind on ARCS/reviews lately, but I found that I didn’t want to skim it at all, I wanted to savour it.

Take Back the Skies is a fast-paced, well written, fantasy-adventure. Protagonist Cat, is a loveable, head-strong character who I instantly felt invested in.

We follow her as she runs away from her snobbish, government father who wants to marry her off for status, to the skyship Stormdancer where she meets a colourful array of characters who soon become Cat’s family. Once in the skies, it quickly becomes apparent that things in Anglya and the surrounding islands are not as they seem. The war seems to have ended, so why are all the teenagers being ‘collected’ to go to war? Where are they?

Seriously guys, I really loved this. There was a lot of action and intrigue, and I think the world Saxon built is great. There was a lot of characterisation too, so even though Cat hadn’t known the crew of the Stormdancer very long, it felt OK how close they became. There is a cute romance between Cat and Fox, a hot orphan who likes to get his guns out – in both senses of the word – but it did start to feel a bit Twilight-y on some occasions where Fox was telling Cat that he’s no good for her and she should choose another. And also Cat thinking that he couldn’t possibly like her. Yawn.

Once they’d gotten over that though, and decided to be together, I liked that it wasn’t all Cat thought about. There was no ‘omg he kissed me and it felt amazing and I want to touch him all the time’, it was pretty much wham, bam, thank you maam (they’re wasn’t actually any ‘bamming’, don’t get your hopes up).

Cat, Fox and the rest of the Stormdancer crew were intent on outing the government and finding out what was happening to all the kids, and once they do, there’s definitely a sense of look what you’ve got yourselves into. I really enjoyed the conflict between high-society and the commoners, and the sinister operations of the government – I wasn’t expecting that plot at all.

However, I can’t wrap this up without talking about the ending. No spoilers I promise, but it was just bad. End of. There was no need for the Epilogue at all, nothing was resolved, and I only hope that the outcome makes more sense in the second book.

I’m tempted to give it 3 Unicorns just because of the ending, but the rest of it was so good, so I won’t. Any book that makes me GASP deserves 4 Unicorns.

Take Back the Skies is available from Waterstones in Limited 1st Edition Hardback, and Paperback from today.

7 thoughts on “(Out Today!) Skyships, Pickpockets, and a Whole Lot of Lies…”